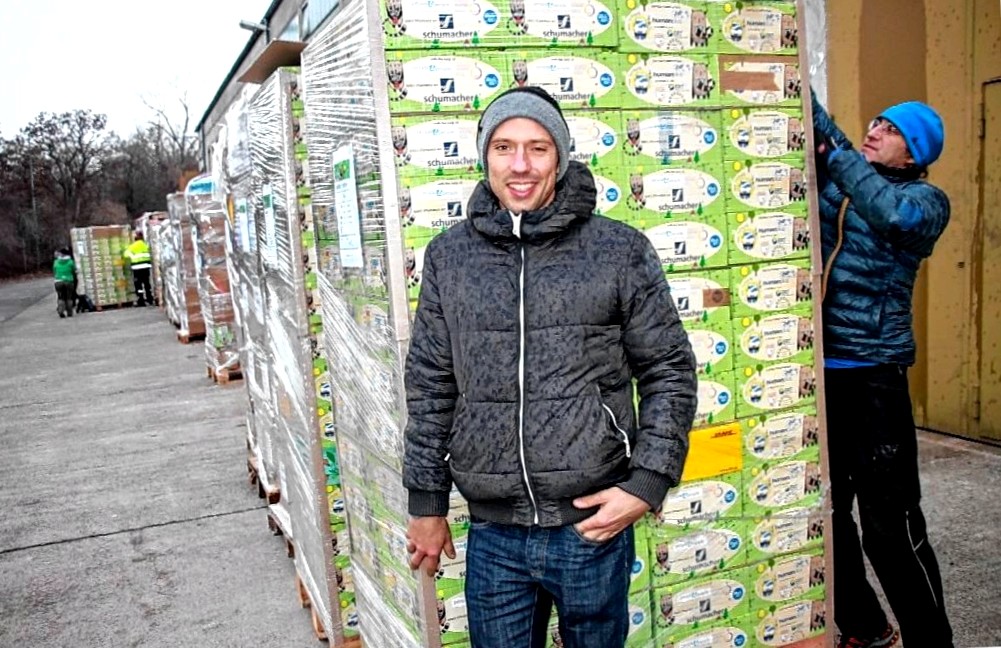 The hall is full. There are pallets everywhere. Dozens of colorful packages are piled up on each of them. The journey can start soon. Destination: syria. Hope: making lots of children happy. And adults too of course.

Tobias winkler looks around. Everything is ready. The packages on the pallets are wrapped in cellophane foil to prevent them from falling over during transport. In one corner of the hall are other items: bedding, dishes, walking aids, mattresses, wheelchairs. All this will be loaded onto two trucks this wednesday. And then it’s off to syria. The majority of the pallets are already in front of the hall, ready to be picked up.

Love in the box is the name of the project that started in wurzburg in 2015 – and has now reached almost all large cities in germany. Tobias winkler is something like the engine. Untiringly he goes to work six months a year. But without his hard-working helpers he would never be able to do the work. He has 20 to 30 in the region. They are on site this wednesday to finally clear out the warehouse and get the aid packages on the road.

In the district of kitzingen, too, there were so-called collection points where the empty boxes were picked up and the full boxes were accepted again. From there we went to the main camp, which this year is located in gerbrunn, more precisely in a hall on the edge of the former leighton barracks. "This used to be a tank hangar," explains tobias winkler and has to laugh. It’s a nice twist: where weapons of war used to be stored, there are now piles of "love packages". Hope for peace.

About 8000 packages have been brought to gerbrunn from the respective collection points, and about 120 pallets are waiting in the hall to be taken away. Winkler works with the human plus e team to distribute the goods on site.V. Together. Volunteers deliver the boxes and aid supplies to men, women and children in various regions.

During the wave of refugees in 2015 the idea for the project matured. Volunteers get to know each other while hauling boxes in the clothing stores and helping in the shelters. They decided to take action themselves. In 2016, they launched the first pack-and-carry campaign. "Back then, we took the things to greece," winkler remembers. "To the children in the refugee camps and to the roma settlements."The following year the christmas boxes were distributed to needy people in germany through the "tafeln". This year, syria.

Finally the trucks are coming. The loading can start. Six months of work behind tobias winkler and his helpers – besides all the challenges of a normal everyday life. Why he does all this to himself? Tobias winkler does not have to think about it for long. "The many talk does not help us after all."For him, the logical answer is to become active, get involved and help. "I also like the idea that the local people are happy about the gifts."