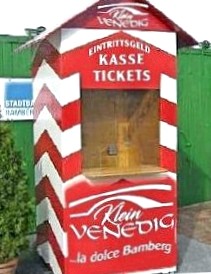 Michael memmel from may venice will no longer let tourists into the water city for free. In the future, visitors will have to pay 3 euros if they want to get a close-up view of markusplatz or the rialto bridge.

What is right for big venice can only be cheap for small venice, after all, bamberg also has to contend with masses of tourists. At least that’s what FT reader ben buchner believes and has done some investigative research on the subject. His investigations revealed: "at a top-secret town hall meeting, after a wine-filled discussion, it was decided to introduce this measure for bamberg’s little venezia as well." Only four ticket booths are supposed to allow access to the picturesque quarter on the left arm of the regnitz, and these have already been built, as evidenced by a picture sent to him by "a known incompetent informant" was played to him. As further research by an FT mole revealed, the entry fee – incidentally in the amount of 10 euros (quote from a city official: "da hast dann ka probleme mit’m wechselgeld.") – to be used first of all to transform the muna land into a new fixed site for plarrer and co. Move design.

Thank you, ben buchner, for the insight into the "secret paper" the city of bamberg – and for the active contribution to the FT theme week humor! We can only hope and pray that our reader has not actually given politicians and administrators any ideas.