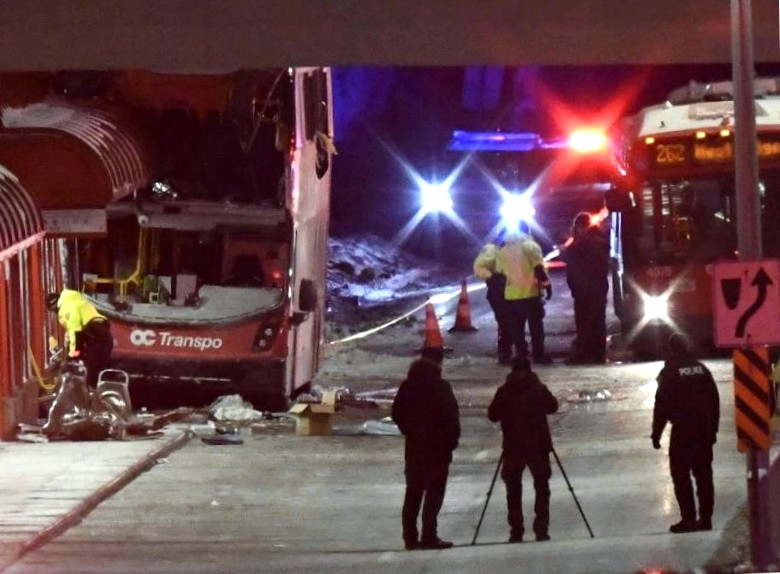 A serious bus crash in canada’s capital ottawa in the middle of rush hour traffic has claimed the lives of at least three people.

A double-decker city bus rammed into a covered bus stop on friday afternoon (local time) for reasons that are still unclear, the roof of which drilled into the first rows of seats on the upper deck.

Two passengers on the bus and a person waiting at the bus stop were fatally injured, according to ottawa police chief charles bordeleau. Most of the 23 people injured, some of them seriously, were taken to hospitals, as the newspaper "ottawa citizen" wrote on saturday night.

The cause of the accident at the westboro station on line 269, which connects downtown ottawa with the suburb of bridlewood, was not initially known. Police took the bus driver to the station for questioning, as the ottawa citizen further reported. The icy weather may have contributed to the accident, it said. According to passengers, the bus was full, and passengers had also been standing in the aisle.

Photos showed the severely demolished upper front of the bus. The roof of the stop had slid over the first upper rows of seats and under the bus roof, according to a photo posted on the home page of local station blackburn news.

Most of the seriously injured were on the upper deck, bordeleau said. Several passengers were pinned with such force that rescuers had to free them from their predicament. Bordeleau spoke of a "very difficult and chaotic scene" for responders.

An eyewitness told the ottawa citizen the bus hit a patch of ice before hitting the road around 15.50 o’clock (local time) got into the bus stop. Bilal gill, who was sitting in the back of the upper deck, told the CBC that the bus hit something and started to lurch.

The driver was unable to regain control and the bus crashed into the bus shelter. "A lot of people were screaming, the people in front were trapped under their seats," said gill. Police were then on the scene quickly and smashed windows to recover the injured, he said.