In order to give the children who have fled Ukraine back some of their everyday life, the stern Foundation and the German Children's Fund launched the fundraising campaign "Ein Ranzen fur Dich" ("A Satchel for You"). The willingness to help was overwhelming. Now the first satchels have been handed over in Bremen and East Frisia.

The dramatic weeks that lie behind them are not apparent at first glance to little Milena and her brothers Andrej and Gleb. They romp wildly around Bremen's marketplace, sometimes hiding behind their mother, sometimes behind the Bremen Town Musicians, sometimes among the tourists photographing the bronze sculpture.

The flight from Ukraine, the older brother who is currently fighting there in the East, it almost seems like a surreal nightmare. Five-year-old Milena and eight-year-old twins Andrej and Gleb are simply children full of anticipation at this moment – for a little piece of everyday life.

Help us to help. Your donation will be used to purchase and distribute schoolbags including basic equipment. Click here for our donation form. Or also: Foundation stern e.V., IBAN DE90 2007 0000 0469 9500 01, keyword "Schulranzen" (satchel)

Satchel? "Good idea! I am there"

A few weeks ago, the stern Foundation and the German Children's Fund launched a very special fundraising campaign: We want to make it a little easier for children who have fled Ukraine to arrive in Germany. Conveying a little normality. We want to give them school satchels.

Our appeal hit a nerve. "Good idea! I am with you", wrote us a donor. Another: "May this satchel bring some joy to a child and help to overcome the horror of war and flight." The willingness to help was – and is – enormous. So big that we already have 100.000 euros in donations for schoolbags – and another 150 euros soon.000 Euro into the project. 100.000 Euro of which will be contributed by the RTL Foundation. So a total of a quarter of a million euros for refugee girls and boys.

The German Children's Fund has already been able to send more than 1,200 satchels to institutions that care for refugees: school clubs, after-school care centers, parents' initiatives and German-Ukrainian aid organizations – such as "Ein Herz fur die Ukraine e.V." from Bremen, whose comrades-in-arms also take care of Milena, Gleb, Andrej and their parents. 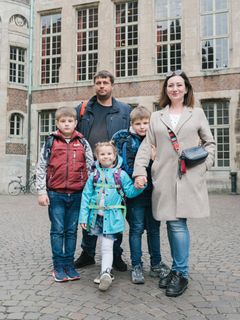 The Ovchinikov family in Bremen: Little Milena, twins Andrei and Gleb, mother Victoria and father Dimitri. The eldest son of the family is currently fighting as a soldier in eastern Ukraine

The story of little Milena Ovchninikova and her family resembles that of thousands who seek protection here – and yet has a particularly tragic twist. For it is already the second escape of the family. In 2014, they left Donetsk, back when pro-Russian separatists took over the city in eastern Ukraine. They moved to Dnipro, a bit further to the west "and now we had to leave again", says mother Victoria.

Their odyssey toward safety lasted several days. First by train all the way to Poland, sometimes the cars had to stop for hours in the dark because of the danger of air raids. Then by bus to Hannover, finally here to Bremen. 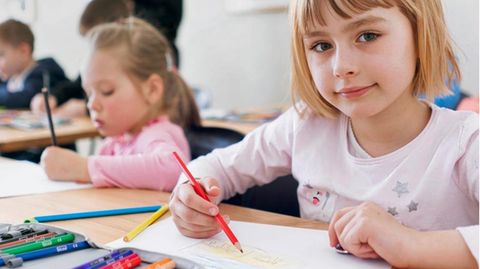 Victoria Ovchninikova looks calm when she talks about her escape. But suddenly tears come to her eyes – when she shows the photo of her eldest son Victor on her cell phone: He is fighting as a soldier in Kharkiv. "I only get a message from him every few days", the 39-year-old says, "I am simply terrified for him."

She and her three younger children are staying in the exhibition halls in Bremen, and her husband Dimitri is also here – he was released from the army for health reasons. It is not yet clear where the family will end up staying. And also not when the children will start school here. But some support on the way, that should give them and the twelve other children who have come here to the marketplace of Bremen, the school bag.

Bremen's social senator is also enthusiastic about the campaign

Five-year-old Milena has already got hers "she doesn't want to take it off", says her mother Victoria. Handed over to the other children Marc Goergen from the stern foundation. Tetyana Chernsyava from "A Heart for Ukraine" in front of the town hall in Bremen the satchels. Bremen's social affairs senator Anja Stahmann also drops by.