Winter time is cold time. On average, every German has an influenza infection three times a year, most of them during the cold season. This is not so much due to the cool to icy temperatures as to the interaction of various factors.

On the one hand, the accumulation of colds is due to the increased number of germs in closed rooms. In addition, the warm air in homes and offices dries out the mucous membranes of the nose and lungs, making it easier for pathogens to penetrate the body. The low outdoor temperatures also weaken the body's immune defenses somewhat, which means that illnesses caused by pathogens already present are triggered more quickly.

Bronchitis is also in high season under these conditions. The acute form is an inflammation of the mucous membranes in the bronchial tubes, which usually subsides after a few weeks. The most important symptom is the cough. "Acute bronchitis is mostly accompanied by inflammation of the upper airways and is very common," explains pneumologist Univ.-Prof. Dr. med. Michael Dreher, Director of the Clinic for Pneumology and Internal Intensive Care Medicine (Medical Clinic V) at RWTH Aachen University Hospital. 90 percent of cases are caused by viral infections.

Do not underestimate pneumonia

Pneumonia, on the other hand – in which the alveoli and/or lung tie are inflamed – is usually caused by bacteria, and less commonly by viruses, fungi or parasites. Pneumonia is often preceded by a viral infection.

"Pneumonia is often underestimated or not even perceived as such," warns Prof. Dreher. The disease is one of the most common fatal infectious diseases in Western Europe. "About one in seven cases of pneumonia is severe enough to require hospitalization," says the pulmonologist.

On average, every German has an influenza infection three times a year.

Typical symptoms are fever, chills and breathing difficulties – but there are also atypical forms in which the symptoms are not pronounced at all or only slightly.

Watch out for asthma and COPD

Those who already suffer from asthma or COPD, chronic obstructive pulmonary disease, must generally be more careful in winter. The climate and the conditions mentioned above can be very hard on the respiratory tract of COPD patients. In winter, acute exacerbations of the disease are therefore not uncommon. Compared to spring and summer, they occur more than 30 percent more often in the cold season. Often, a simple respiratory infection triggers the worsening in the bronchi already attacked by COPD.

In asthma, the trigger of the asthma determines how badly sufferers suffer from their symptoms in winter. Here's how patients who are sensitive to flower pollen have a relaxing time in winter. However, if the trigger is animal hair or dust mites, the symptoms can be aggravated by the dry heating air.

Tips for healthy lungs in winter 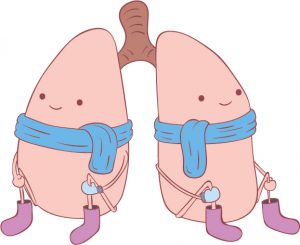 With a lot of exercise fresh air, a balanced diet with plenty of vitamins, plenty of sleep and little stress strengthen your immune system. Zinc also helps to boost the immune system.

Avoid nicotine smoke in your environment, and be sure to try to quit smoking.

Avoid dry, stale indoor air. Ventilate several times a day. To keep the air humid, it helps to put a bowl of water on the heater. The evaporating water provides beneficial moisture. Alternatively, you can hang a damp cloth directly over the heater or use a room humidifier.

A Inhalation Using chamomile, saline solutions or essential oils is soothing and moisturizes irritated nasal mucous membranes. "This supports the natural cleansing function of the mucous membrane, which is an important part of the immune defense," says Prof.