Diabetes mellitusIf you put the Greek word diabḗtes ("flow") and the Latin mellitus ("sweet as honey") together, you come up with a poetic description of this disease: it is about the excretion of blood sugar through the urine. For those who suffer from diabetes have too much sugar in the blood. 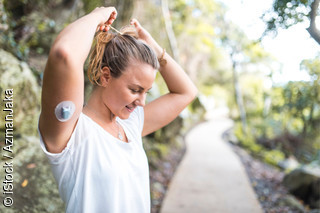 Diabetes mellitus, often simply called "diabetes", is a pathological disorder of the sugar metabolism. The blood glucose level of those with the disease is permanently elevated, which, if left untreated, can lead to a large number of secondary diseases, some of which are severe. In most cases, the body's own hormone insulin, which controls sugar levels in the body, is produced in insufficient quantities. Science distinguishes between two types of diabetes:

Type 1 diabetes
Here, the pancreas is the site of action: In patients with the disease, the insulin-producing cells are destroyed by the body's own phagocytes – because they mistakenly consider the insulin-producing cells to be dangerous or foreign. Type 1 diabetes is an autoimmune disease in which the immune system turns against its own body without needing to do so.

Type 2 diabetes
The body's cells themselves are the weak point here: initially, the pancreas still produces enough insulin. But the body's cells become increasingly insensitive to it. Although there is sufficient insulin in the body, it can only exert its regulating effect on blood sugar to a limited extent or not at all. In response, the body forces the insulin-producing cells to produce more and more insulin. However, the pancreas cannot keep this up forever: As the disease progresses, insulin production continues to decline – until it comes to a standstill.

Where does diabetes mellitus come from??

Why the immune system is impaired in people with Type 1 diabetes The cause of diabetes, which attacks the insulin-producing cells of the pancreas, has not yet been clarified. A hereditary predisposition is suspected in some cases: for example, around ten to 15 percent of type 1 diabetes patients under the age of 15 have a first-degree relative (mother, brother, etc.).), who also suffers from diabetes. The following are discussed as external factors: premature weaning, the ingestion of toxins, but also infectious diseases such as mumps and rubella, and the simultaneous presence of other autoimmune diseases. Even with Type 2 diabetes hereditary factors play a certain role. However, personal lifestyle has a much more serious influence on the risk of developing this form of diabetes. Important risk factors are obesity, lack of exercise, smoking, and a diet low in fiber and high in fat and sugar.

What are the symptoms? Patients with both types of diabetes suffer. Patients with similar symptoms. Since sugar must be constantly flushed out of the body through the urine, patients have to go to the toilet very frequently and often excrete large amounts of urine. The urge to urinate is particularly pronounced at night. Frequent urination in turn triggers an agonizing feeling of thirst in patients: The body tries to compensate for the loss of fluid by drinking more. Other everyday symptoms include fatigue and impaired concentration, impaired vision and a weakened immune system – as a result, diabetics contract infections more often and for longer periods of time. The long-term damage caused by untreated or poorly controlled diabetes can be severe: In the course of the disease, the blood vessels narrow, which can lead to serious cardiovascular diseases such as heart attacks and insufficient blood flow to the brain and thus to strokes. Impaired wound healing can lead to severe skin infections. ulcers ("diabetic foot") may occur. The eyes are also affected: severe damage to the optic nerves and even complete blindness are possible.

How common is the disease?

There are currently around seven million people with diabetes in Germany. The number of unreported cases is high: About one fifth of the patients do not yet know they have the disease. More than 90 percent of those affected have type 2 diabetes. Type 1 diabetes accounts for five to ten percent, or about 300 in Germany.000 people, more than 30 of whom have.000 children and adolescents under 19.(1)

How to treat diabetes?

The good news: Around half of type 2 diabetics can combat the disease without medication – through consistent dietary changes, weight loss and exercise. Otherwise, type 2 diabetes is treated either with blood sugar-lowering tablets and/or the supply of insulin, for example as a combined therapy with tablets or injections.

Type 1 diabetics also benefit from a change in diet and weight loss. Nevertheless, they must always and for life supply the missing insulin – mostly by syringe, insulin pump or pen. The goal of insulin therapy is to adjust the timing and amount of externally supplied insulin as closely as possible to the needs of the person with the disease. For this, the blood glucose level must be measured regularly.