Hoffmann's final diseaseAbber E.T.A. Hoffmann's fatal illness has been the subject of much speculation. An unsteady, exhausting, unhealthy lifestyle, the nightly consumption of wine and punch, even an alcoholic disease, intensive pipe smoking were blamed, but also a syphilis or, especially far-fetched, the nervous disease amyotrophic lateral sclerosis. The written information available on this subject was therefore carefully studied once again from the perspective of a neurologist and reinterpreted. Roland Schiffter studied medicine at the Humboldt University in Berlin. Held a professorship in neurology at the Free University of Berlin as of 1972. He is chairman of the Berlin-Brandenburg section of the Heinrich Heine Society, a board member of the Gesellschaft Naturforschender Freunde zu Berlin (1773), a member of the Viktor von Weizsacker Society, and a pianist in the jazz band Call of New Orleans (→ researcher profile).

E. T. A. Hoffmann suffered an apparently threatening febrile illness ("nervous fever") in Warsaw in 1806 and otherwise all kinds of infections and annoying ailments in the course of his short life, which, however, were without recognizable lasting consequences. Seriously ill again in the spring 1819. He writes on 1. May 1820 to the physician friend Dr. Speyer: " … that in the spring of the previous summer I fell ill to death, namely from the consequences of too much exertion at work and an enormous cold…" Friend Hitzig later informs that it had been a "lower abdominal malady with gouty coincidences" and with "most violent attacks of fever" (Hitzig 1823). Hoffmann goes on a recuperative trip with Mischa afterwards. Then writes: "After this trip I am healthy in an almost indecent way!". Everything speaks for the fact that he went through a feverish inflammatory illness with joint pain and stool constipation. Symptoms that would indicate a spinal cord disease are not found here (Schiffter 2008).

1820/21 Hoffmann is very active and productive (Kater Murr, Princess Brambilla, Serapion Brothers, Meister Floh, promotion at the Kammergericht). He falls in love with the singer Johanna Eunike. So he must have been in fairly good health, but complained at times of "rheumatism" and spreading back pain. 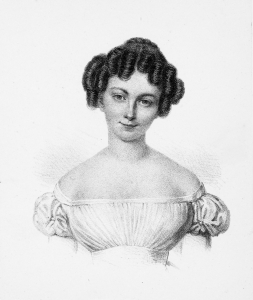 First signs of the disease

The year 1822 will be the last of his life. According to Hitzig's biography of Hoffmann, he must have fallen ill relatively suddenly around the turn of the year 1821/22, but we do not have a precise date for the onset of the neurological disease. Heinrich Heine had observed him still in the Cafe Royal and in March 1822 in his 3. "Letter from Berlin" that Hoffmann was suffering from a "bad nervous malady" (Pissin and Valentin, no year given). In the spring, Hoffmann had described himself in a letter to friend Hitzig as "dull and miserable"; in a letter that followed shortly thereafter, he says: "…the tumor in my feet is falling, but still no trace of movement, which is abominable". So he already has a swelling or a swelling feeling, but above all paralysis in the feet. On the first of May 1822 he reports in his last, very affectionate letter to Johanna Eunike: He is sleepless and dreams of her. "This comforts me for the nameless ailments that have not let me free from the sickbed for four and a half months already. Paralyzed in hands and feet, I am unable to hand over to you coming master flea myself" (cit. according to Ginzkey 1922). According to this, he would even have been bedridden and paralyzed in the feet since mid-December 1821, while at the end of November 1821 he was still "in complete vigor of health" and Heine still saw him at the Cafe Royal in late December 1821 or early January 1822. 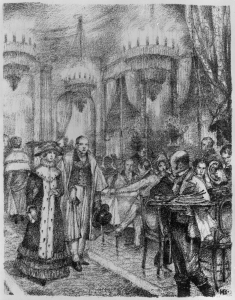 Rapid deterioration of the condition

In Gunzel's biography of Hoffmann, one finds on page 505 (Gunzel 1979): "1822, around the 18.1.: The beginning of Hoffman's final illness". The same day is also called by Roters (Roters, no year). If this information is all correct, around the turn of the year 1821/22 Hoffmann developed a paralysis that rose rapidly from the feet and reached the hands after only 6 days. On 24. January, at his birthday party, he sits "tied to the armchair" and on 26. January 1822 he is already "paralyzed in the wings" (Hitzig 1823). He nevertheless clings fiercely to life. Hopes for improvement until the end.