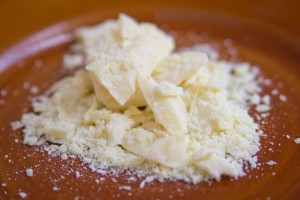 Chocolate. An almost magic word. Synapses seem to flare up just by uttering the word. Chocolate is a popular stimulant and available in many varieties and qualities. The basis of chocolate is the cocoa bean. If you look at the ingredient list on a chocolate bar, you might find cocoa butter next to cocoa. Butter reminds of fat. What is it all about?

What is cocoa butter? Cocoa farmers ferment cacao beans after harvesting. Dry them afterwards in the sun. Later roasting, cracking and removal of the husk usually takes place. They are then ground (conched) into what is known as cocoa mass. Often, this mass is then pressed and fat escapes: cocoa butter. This then undergoes filtration or centrifugation.

It is precisely this composition of fatty acids that leads to the well-known and inimitable property of chocolate: it is solid at room temperature, even in the hand, but melts in the mouth. It is precisely this feeling of melting that is an essential factor of chocolate taste. In addition, there is the noise. The feeling of crunching chocolate. This is also called snap. In the production of chocolate, manufacturers influence exactly this behavior by kneading and cooling the warm chocolate mass in a very controlled manner (conching and tempering).

Especially during tempering, the controlled cooling of the melted cocoa mass, it is important to maintain a very specific temperature range. Only then do stable fat crystals form and the chocolate becomes hard and audibly breaks when it cools down. If, on the other hand, chocolate is simply melted in an uncontrolled manner and then cooled again, it generally loses its firmness and becomes greasy: a large part of the sensory experience is lost.

Cocoa butter is a fat and therefore first of all an excellent source of energy for humans. The low percentage of polyunsaturated fatty acids means high stability. Thus also a low health risk due to oxidation in the body. There remains a large proportion of saturated fatty acids, which are (unfortunately still) considered unhealthy by the general public. However, concerns about saturated fatty acids have been proven again and again in recent decades to be unwarranted.

Palmitic acid, for example, is the form in which most fat is stored in humans. Why would the organism choose this form if it would be harmful to health?

According to the current state of research, stearic acid seems to have rather beneficial effects on blood lipid levels. The body also converts it very quickly into oleic acid, a monounsaturated fatty acid. This is also contained in particularly large quantities, for example, in olive oil. In terms of cholesterol levels, therefore, concerns do not seem appropriate. The research around the relationship between fats. However, cholesterol is anything but closed. However, cocoa butter is not unhealthy according to the current state of scientific knowledge. Rather, it shows (at least in rats) a rather cholesterol-lowering effect and more clearly, the higher the cocoa butter content is.

However, this depends on the context: Cocoa butter in the form of milk chocolate with a high sugar content admittedly has other effects on the metabolism, this combination has a rather unfavorable potential for humans. Chocolate with a high cocoa content is therefore preferable, from 80% upwards the sugar content is almost negligible. Chocolates based on high-quality cocoa beans do not necessarily taste bitter, but fruity and sometimes even sweet. It is therefore worthwhile to look for the right product for your own palate here.

Cocoa butter is not unhealthy and seems to tend to have positive effects on humans. It is mostly used in the form of chocolate, products with a high cocoa content, i.e. from about 75-80% upwards, are the best choice.

And here is the answer to the next question: Is chocolate healthy??

Hi Felix, in the one sentence you wrote it sounds like it would be beneficial to have low cholesterol levels. However, a comparison with rats is probably also of little use. Even animals of the same species, such as Galloways and conventional cattle, react so differently to feed quality that a comparison between humans and rats would be of little use.

So, in the end, are you of the opinion that cocoa butter is a good vegetable edible fat, like coconut fat?? What about the use of pesticides in the cultivation??

Hi Markus, what is good for whom, everyone should decide for themselves. Of course people are not rats. That's why I explicitly point out that the test was carried out on rats.

To answer your final question: cocoa butter seems to me to be a fat with positive overall health effects. As far as I know, no pesticides are used in cocoa cultivation. You must remember that the cocoa beans are seeds inside the fruit. So even if animals were to eat or damage the fruit, it would be relatively harmless.

Cholesterol levels indicate cell regeneration needs, because cholesterol is needed to make new cells. It is harmful to health to inhibit the synthesis of cholesterol for this reason, but if the cholesterol level in the blood drops because a healthy lifestyle (plenty of salt, fat and sleep) reduces the need for regeneration, this is also good. Losing weight is easy. Can be combined perfectly with enjoyment. The road to success is only a few steps long. (Also at Amazon.) 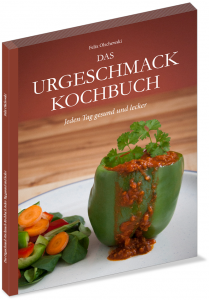 The Paleo wave in Germany began with the Urgeschmack cookbook: recipes to enjoy and lose weight. Paleo-compatible, low carb, delicious. There is something for everyone. (Also at Amazon.)

Easy Cooking – Methods and Recipes: Cooking well is easy and doesn't have to take long. In this book you will learn everything you need to prepare and vary healthy meals that will make your palate shine.