Multiple sclerosis – possibly a parasitic disease?possibly the chronic-progressive course of MS is a worm disease.

one MS patient (without symptoms) was put into MR weekly, it shows unbelievable dynamic conditions in the brain: foci of inflammation come and disappear again in a few weeks

T-cell disorder, "autoimmunological clones", … …. -> research is all about symptoms and can't explain where they come from – what disturbs the T-cells, why is the immune system going crazy, what is really going on??

in our practice we see very good practical results with the remittent, relapsing form of MS. This usually responds quite well to the methods of integrative holistic medicine, very rarely our patients have relapses, these were mostly promptly correctable.

quite different from the chronic progressive form of MS. The most seriously ill, paralyzed patients mostly have 15 amalgam fillings in their mouths, nursing cases and completely impoverished, here no more remediation can take place and such cases have so far been irrecoverable for me and died.

The not yet so severely ill patients in wheelchairs unfortunately also respond poorly to our therapeutic efforts, even after protected removal of the amalgams things only go sideways and finally downwards again.

I had an ALS patient a few weeks ago, where we found a worm-like structure in her blood. 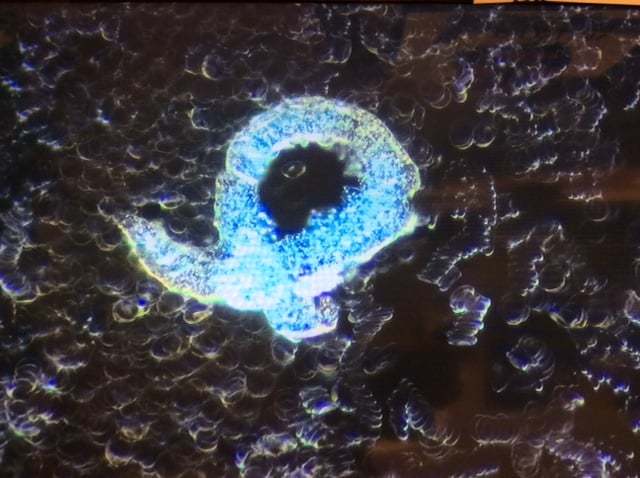 Just at this time the two darkfield experts Gunnar Torbohm and Nadine Bukowski visit and taught us not only the dark field diagnosis of Lyme disease, but v.a. Worm larvae. worm eggs in blood! Nadine Bukowski microscopes the blood of my daughter. She found a larva of a worm – probably Strongyloides Stercoralis – Nadine is on her toes with the worms and can diagnose the species quite well based on the shape. here the Larva of the dwarf threadworm, of a nematode. Size-wise this fits perfectly to the structure in the blood of my daughter. larvae shed their skin up to 12 times, the shed skins trigger strong inflammatory reactions. According to Nadine, it is common for such larvae infestations to occur without laboratory abnormalities, it is not necessary to be able to detect eosinophilia

I have already written an article about the visit of the two darkfield experts "Parasites in blood".

My thereby triggered Research on Neuro-Helmintiasis led me to Dr. Alen MacDonald, the scientist and pathologist about whose exciting discoveries I report in detail in the "addendum" below 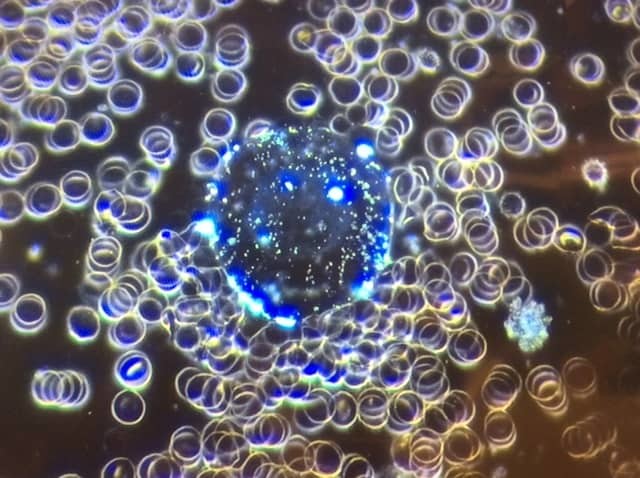 a helminth egg in the dark field. comes from the blood of my daughter

Nematodes = worms as a trigger of brain inflammations were – according to Dr. MacDonald – already early known. Detection directly in brain tie is difficult, MacDonald says, because the worm crawls through the brain and is only visible in a few histo-sections, while damage from the subsequent inflammatory response occurs along its "migratory pathways". It is his "discovery" that the spinal fluid can be microscoped. Here the worm detection can be done very easily.

Here again Dynamics in the brain of an MS patient during 1 year, in picture 4 is the weekly counter.

If one now observes the two large dynamic foci on the left, one thinks to see an inflammation creep track of the worms between these foci! If one interprets this picture as a reaction of worm larvae colonization the strange. Inexplicable change of inflammatory focus localizations suddenly quite logical!

Lecture by Dr. MacDonald about his parasite discovery in all MS cases

Synchronicity …. the strange "coincidences" in the life of

oddly enough – tonight I saw this lecture by Dr. MacDonald discovered and continued researching helminth disease almost into the morning, and this morning our most severe MS sufferer is coming in for an appointment!

CAVE: Bringing nematodes as a cause of neurological disease to the attention of physicians and sufferers is absolutely important and the intention of this article.

In no way do I intend to encourage untargeted or layman-led "deworming cures".

These can namely most violent Herxheimer reactions result in which – statement of Dr. MacDonald above in the video – already many patients died!

Who has studies, experiences, publications, photos etc. on this subject?. has, please send by all means. I have the impression that we doctors have completely ignored the nematode larvae as the cause of the disease! 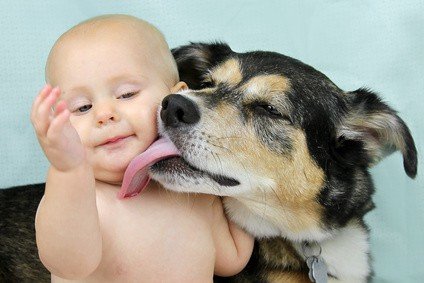 Our cats are dewormed monthly, the dogs twice a year, the owners not once, although they constantly cuddle around with the animals!

Astonishing findings from pathology and prosecture

Last year I already reported that the spinal cord smear of ALS patients is teeming with Borrelia.

But now I am really fascinated by the internationally known scientist and pathologist Prof. Dr. Dr. Rolf. Dr. Allen MacDonald, because he actually published our practical experience and incidental findings 30 years ago (numerous studies by Dr. MacDonald).

Already in 1986 Dr. Allen MacDonald found Borrelia in all 30 Alzheimer's brains he studied more closely. His research went further and he was able to show that the beta-amyloid plaques are a co-precipitate of Borrelia proteins with the tau proteins, that the Alzheimer brains are also full of Borrelia biofilm (v.a. also Dr. Eva Sapi).

Today we still have neurologists in Austria who are convinced that there is no neuroborreliosis, the absence of antibodies excludes Lyme disease as a cause in principle – although it has been clear for decades that only 30% of Lyme patients show antibodies.

MacDonald all by himself

Except Dr. MacDonald is not scientifically concerned with this topic and since then only a few studies have been published – "everything is a coincidence, there is no connection".

But: in 2016 we had a patient in the office whose moderate dementia we could completely resolve in a few months with antibiotics.

Neuroborreliosis is the syphilis of the 21st century!

My observations in the St. Georg Klinik in Bad Aibling – which is the world leader in hyperthermia treatment of Lyme disease – are always shocking. The patients, mostly from Australia or the U.S. are often in wheelchairs, can tw. No longer see, speak, barely function in everyday life, and are abandoned by their conventional medical doctors at home as "imaginary sick people" because they have no Lyme antibodies.

Incredible advice, important for all neurological cases, should have been seen by every neurological practitioner!

See the lecture of the scientist Dr. Eva Sapi, who herself had Lyme disease and was able to get to the bottom of the ie of relapses after antibiotic therapy.

In her talk she says very clearly between the lines how difficult it is to publish about neuro Lyme disease.

Is there perhaps a reason to "talk down" Lyme disease?? Some of the big diseases of recent years – LYME. WEST NIL VIRUS as well as other VOGEL diseases all originated in Conneticut.

Plum Island, the home of Laboratory 257 – a bioweapons research facility – is only a few kilometers away. Some of the big epidemics have started from there

Exactly in the direction of flight of the migratory birds, these infectious diseases have spread from Plum-Island in the USA, finally worldwide.

Whether subsequent in-depth and historically wide-ranging research on the Plum Island lab is right or wrong, ihc can't tell, but I certainly found it fascinating.

Dr. Garth Nicolson, a biochemist whose wife became ill with GULF WAR syndrome could identify it as a chronic mycoplasma infection. Unfortunately, the germ was a biological weapon, so Dr. Nicolson long opposed. Scott Forsgreen has written an excellent article on mycoplasma and Dr. Garth Nicolson's work authored.