Every year, an estimated 100,000 people die from snakebites. About 400,000 carry permanent damages of it. Spider bites and the stings of some jellyfish and scorpion species can also cost sufferers their lives.

Animal toxins are usually complex mixtures of organic substances such as proteins, which misdirect or block biological processes in the body of the victims. Since they can vary greatly in structure and mode of action even within an animal genus, there are hardly any universal properties that apply to all toxins. Antidotes are designed to reduce the effect of the substance. This can happen in a number of ways, such as binding the toxin to itself, converting it into a less toxic substance, displacing it from the site of its action, or accelerating its metabolism and excretion.

Antidotes are used to reduce the effect of the substance

Natural poisons are combated with antibodies: they dock precisely onto the toxic molecules and thus disable them.To make such an antidote, you first need the appropriate venom.

In the case of snakes, it is extracted by snake milkers such as the South African Chris Hobkirk. To do this, they grab the animal by the head. Have it bite on a foil-covered vessel. The escaping poison flows into the beaker. To increase the yield, some additional prere can be applied to the venom glands from the outside. But even so, only a few drops are produced. So you need not only good nerves, but also a lot of patience until you reach quantities that you can work with on a large scale. "We milk our snakes only once a month. That's the only way they accumulate a high-quality venom," Hobkirk explains. "If they were taken more frequently, we would get a diluted venom that is not suitable for further processing."

Poison removal is no less delicate for other animal species. Spiders, for example, are anesthetized with gas and their venom glands are stimulated by a light current, causing a few drops of venom to flow out. Another method is to provoke the spider until it releases venom of its own accord, and then hope to be able to suck up the tiny droplets at the right moment with a pipette directly from the venom claws. 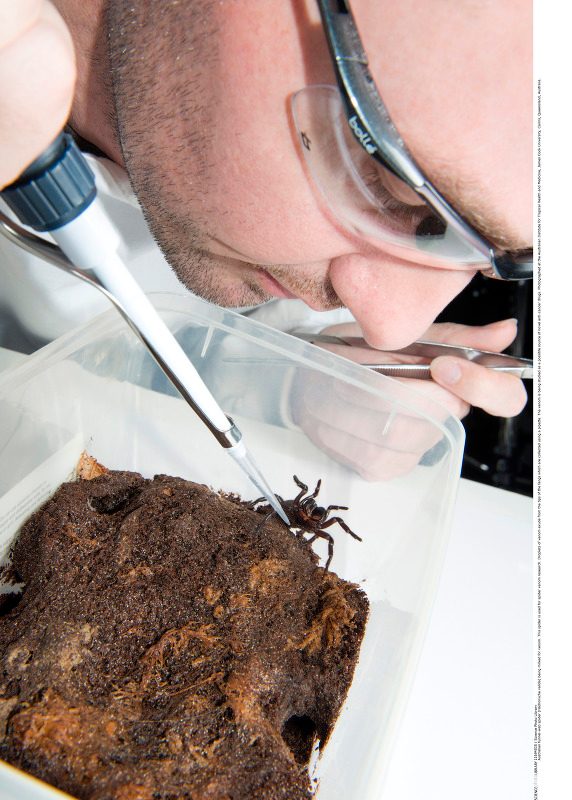 A researcher uses a pipette to catch the neurotoxin on the venom claws of an Australian funnel web spider.

Once the desired venom has been extracted, the further steps are the same for all antivenoms. It is first freeze-dried to remove the water from it and make it durable. Once enough venom has been gathered, antibody production can begin. For this purpose, animals, usually horses or sheep, are exposed to the poison in a highly diluted form. Receive injections spread over several weeks. As a defensive reaction against the poison, their immune system forms antibodies. When they reach their maximum level after a few months, they are extracted from the blood and purified. Finally, their concentration is specifically adjusted before they are bottled up.

Time is often the most important factor in treating poisonings

The finished antidote is stored either as a liquid in ampoules or dehydrated in powder form. The powder can be kept at higher temperatures, which is important, especially for remote regions with hot climates. Its major drawback: it must be redissolved in water before administration. "To do this, you roll the vessel gently and must not shake it to avoid bubble formation," explains snake catcher Arno Naude. "This takes up to half an hour. However, you do not have that much time with many snakebites."

Time is often the most important factor in treating poisonings. That's because antidotes can neither destroy the toxic substances nor reverse damage already done.

Another pitfall in production: even snakes within the same species sometimes have very differently composed venoms. This is probably due to different habitats and prey species. Thus, the venoms of some species contain many neurotoxins to paralyze the nervous system of their prey and quickly immobilize them. Other populations, however, can afford to go after their prey after a bite; they rely more heavily on hemotoxins, which disrupt clotting or oxygen transport of blood, or cytotoxins, which kill body cells.

"What this variability is based on remains a great mystery. In a sense, evolution is taking place before our eyes," explains Dietrich Mebs. He is the author of the standard reference work "Venomous Animals" and has been researching venoms as a forensic scientist and toxicologist for decades. To compensate for these regional differences, animals from different locations are always used and their venoms mixed, says Naude. Often, however, there is a bigger problem: "In half of the bites, we don't know what species we're dealing with."Then one must reconstruct by questioning, bite marks and symptoms, what happened.

Antisera for bites of unclear origin

Medicine is also prepared for these cases by mixing antisera. Such polyvalent antivenoms typically cover the most dangerous snake species to humans in a region. In South Africa, the antiserum includes five cobra, three mamba and two viper species. The immune serum "Europe" covers five venomous snake species native to our continent.

Due to the complex and expensive production, there is a chronic shortage of antidotes on the world market. Many shamelessly exploit this, complains Mebs. "In the journey from the producer to the farmer in another country, the price of a vial increases fivefold to about $500," says the researcher.

The need to make profits has devastating effects. "If a snake species bites only about 200 people a year, it is simply impossible to get back the money invested in antidote development," Naude explains. In addition, antivenoms would not be produced for species whose bites are rarely fatal but can cause severe permanent damage. "This fixation on deaths is a problem, because people don't die then, but they sometimes carry disabilities for the rest of their lives."

Long development times and high costs are a problem

These conditions prompted the World Health Organization in 2017 to add poisoning from snakebites to its list of neglected tropical diseases. Also in the research one neglects natural poisons, means Dietrich Mebs. Although they offer enormous potential for drug development, only a handful of substances from this field have made it to market in the past 50 years. "Given the long development time and high costs, many researchers don't even dare to try poisons," Mebs explains.

While there are antivenoms for the most common snake bites, the situation is not so good for other venomous animals. Those caught by certain jellyfish or a blue-ringed octopus in Australia have poor chances of survival without rapid resuscitation. The toxic effect sets in quickly and violently, antidotes are not available. In our latitudes, for example, tuber leaf fungus poisoning can be fatal. "In the first three to four days you notice almost nothing, then the liver fails and only a transplant helps," explains Mebs. However, because of the low number of cases, antidote production is not worthwhile.