Bluetongue BTBluetongue BT is a non-contagious viral disease of ruminants and camelids that is transmitted by biting insects (vectors). The disease is not dangerous for humans.

Several cases of bluetongue have been reported in Switzerland since 2018. Bluetongue disease occurs seasonally in autumn. In the 2020 surveillance program, two cattle tested positive for BTV-8. In 2020, two more positive cattle were found during a veterinary examination. All examined animals were negative for BTV-1 and BTV-4. As a result, Switzerland remains free of bluetongue for all serotypes except BTV-8. 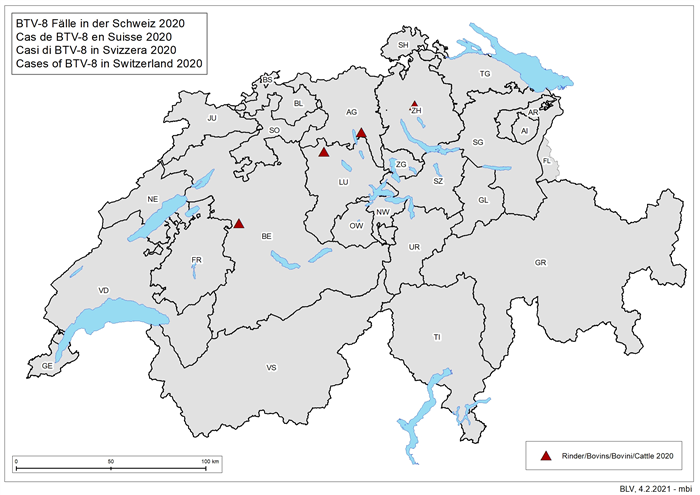 Distribution of BTV-8 cases in cattle 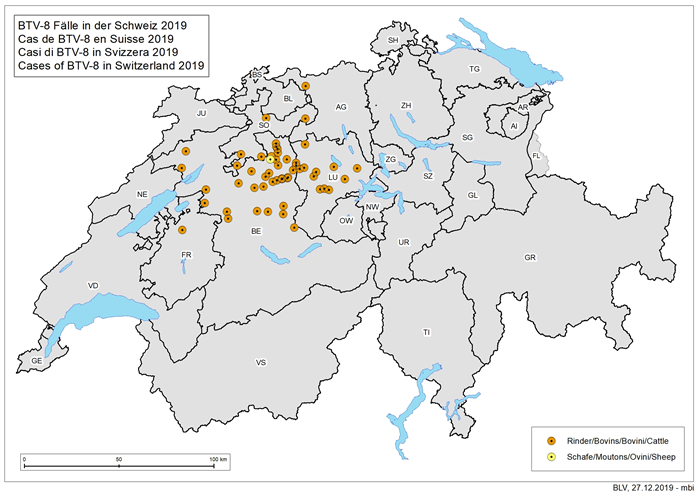 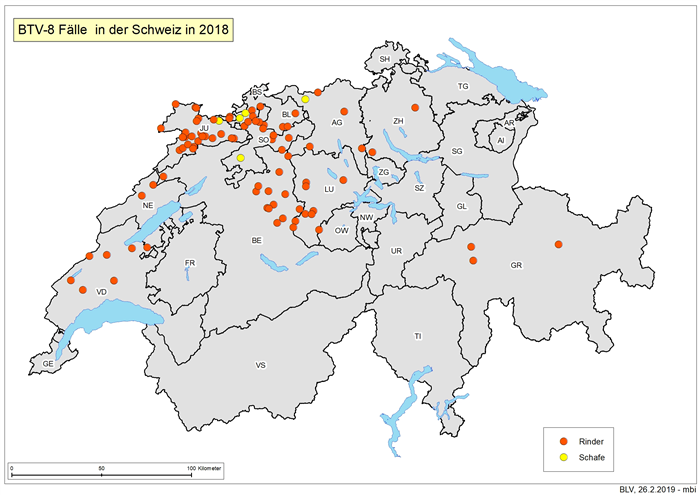 Distribution of BTV-8 cases in cattle (orange) and sheep (yellow)

Bluetongue is not dangerous for humans. Meat and dairy products can be consumed without concern.

Since 2017, the FSVO Ordinance on Measures to Prevent the Spread of Bluetongue has regulated the movement of animals and breeding material out of the bluetongue zone (BTV-8 zone). The BTV-8 zone covers the whole of Switzerland. More information can be found on the website "Protective measures in trade with the EU".

There are at least 26 different serotypes of the bluetongue virus (BTV) with different virulence and distribution. In Switzerland, mainly the serotype BTV-8 was active. All ruminants are susceptible. But clinical disease is usually seen only in sheep and cattle. The course of the disease varies depending on the serotype.

In sheep, the disease can range from inconspicuous to very serious. In cattle and goats the infection is usually without visible symptoms.

The infectious virus is detectable up to one month after infection in sheep and up to two months in cattle. High fever may be accompanied by inflammation of the mucous membranes. Disorders of the blood vessels lead to hemorrhage and edema formation. A bluish discoloration (cyanosis) in the mouth area and on the tongue is possible. Hence the names bluetongue and bluetongue. Edema in the head area is typical. At the extremities. Frothy salivation, serous to purulent nasal discharge and respiratory problems are common. Especially in the case of infection with BTV-8, depending on the stage of pregnancy, abortions and the birth of "dumb" calves and lambs occur (brain malformation).

In the event of an epidemic, comprehensive control measures are required, which also have an economic impact.

The pathogen is a non-enveloped RNA virus of the family Reoviridae, genus Orbivirus. Transmission is by midges – small mosquitoes of the genus Culicoides. These gnats occur in central Europe from June to the end of November.

Direct animal-to-animal transmission has only been recorded for BTV-26 in goats. Excretion in semen occurs.

BTV-8 has also been proven to infect the fetus in utero. Transmissions through cannulas contaminated with blood containing the pathogen may also occur.

The bluetongue virus is present in all continents. In Europe, it spread from the south to northern Europe in the years after 2000. In Switzerland, the first case of bluetongue caused by BTV-8 was registered in October 2007. By the end of 2011, 76 cases had been recorded, tens of thousands across Europe.

Switzerland carried out an extensive vaccination program from 2008 to 2010. In 2008, vaccination was mandatory for all cattle, sheep and goats for three months. In 2009 and 2010, only cattle and sheep had to be vaccinated against bluetongue. The vaccination of goats was voluntary. In 2011, vaccination against bluetongue was generally voluntary. The BTV-8 virus type has been rampant in France for several years. In November 2017, there were detections of bluetongue in Switzerland for the first time since 2012. A bluetongue zone covering the whole of Switzerland was then established. This means that animal traffic in Switzerland remains possible without restrictions for farms not affected by the virus infestation. However, export to countries without cases of bluetongue is only possible with requirements. This concerns not only animal traffic but also the export of semen, ova and embryos. This means that Switzerland also fulfills the EU requirements.

An overview of the epidemic situation in Switzerland can be found in the database Tierseuchenfalle Schweiz. The map with the restriction zones in Europe can be found under "More information> Links" to find.

– In the event of a suspected or epidemic case, the cantonal veterinarian orders comprehensive measures in accordance with the Ordinance on epizootic diseases TSV (see "Further information")

– In a mild course of the disease, especially in cattle, it is also possible to heal independently. – It is recommended not to expose sick animals to solar radiation. It can aggravate the symptoms. – Disease prevention includes planned insect control, keeping at-risk livestock indoors during the night, and vaccination (active immunization) in contaminated or suspected disease areas. – To reduce the infestation of gnats, pyrethroids can be used.

In Switzerland, vaccination against bluetongue has not been carried out since 2012. However, livestock farmers can continue to vaccinate their animals through their livestock veterinarian, which z.B. recommended for animals for export. Bluetongue is a disease to be controlled. Thus notifiable animal disease. Anyone who keeps or looks after animals must report suspected cases to the herd veterinarian. Particular care must still be taken with animals imported from regions abroad with current BT cases or brought back after summering.