Mankind lives longer and grows old with diseases that accompany them for years. Those affected are often not terminally ill, but they are not healthy either. Researchers now back this up with figures.

R back pain, depression, headaches, cancer – hardly anyone will still find someone in their acquaintance and relatives who does not have health problems. Researchers have now scientifically substantiated this phenomenon in an article in the scientific journal "The Lancet," and not just for Germany or Europe, but with facts for the entire world.

According to the report, humanity is anything but in the best of health: In 2013, only one out of every 20 people on earth did not have a health problem. More than one third has five. More complaints. The number of people carrying more than ten diseases increased by 52 percent.

The scientists analyzed the "Global Burden of Disease Study" – an evaluation of 35.620 sources of information on diseases and injuries in 188 countries worldwide between 1990 and 2013. The goal of all this number crunching is to provide an overview of the health limitations that accompany humanity throughout its life; of what burdens health care systems.

In 1990, people were sick for one-fifth of their lives – often not terminally ill, but not free of health problems either. 23 years later, different diseases already plagued them for almost a third of their lives.

The reasons have hardly changed: Back pain, depression, severe iron deficiency, neck pain and age-related hearing loss cause the most disability worldwide. In 2013, musculoskeletal disorders, mental illness and addiction accounted for nearly half of all health problems worldwide, followed by nervous system disorders and respiratory diseases. South of the Sahara, more and more people are living longer with AIDS.

But while the number of disabilities caused by diabetes, for example, is rising sharply by 43 percent, the number of deaths is not increasing just as sharply – by "only" 9 percent, in fact. "It's no longer enough just to focus on reducing mortality," explains Theo Vos of the Institute for Health Metrics and Evaluation, one of the study's authors. "We need to pay more attention to the causes of permanent disability."

In Central Europe, a very different problem dominates these statistics: in eleven of 13 states, a disproportionate number of falls lead to limitations. In contrast, anxiety disorders are on the rise in the Caribbean. Diabetes is the third most disabling disease in Mexico, Nicaragua, Panama and Venezuela. Countries such as Cambodia, Nicaragua and Rwanda are struggling with the long-term effects of war and conflict: many of the diseases there stem from experiences of violence.

But while back pain and co. affect our lives the most since 1990, some medical conditions occur much less frequently today than they did 25 years ago. Neurodermatitis, diarrheal diseases, acne, behavioral disorders and consequences of armed conflicts have each moved down at least two places among the top diseases. The number of diarrheal diseases, for example, fell by seven percent – from 15th place among the 25 most common reasons for impaired years of life to 25th place.

In addition to chronic diseases, researchers were also interested in all that occurs acutely – but also goes again. Seven billion people live in the world, and they have a combined cough and cold nearly 18.8 billion times. So it hits every single person two to three times. Nothing plagues humanity as often as respiratory infections. 2.7 billion times people suffer from diarrheal diseases.

A few months ago, other researchers led by Christopher Murray of the University of Washington in Seattle took a closer look at the "Global Burden of Disease" and focused on life expectancy. The result: it increased by 5.8 years for men and 6.6 years for women for birth cohorts 1990 to 2013. Only in sub-Saharan Africa did life expectancy fall by around five years during the period – due to the spread of AIDS. "The progress we're seeing for various diseases and injuries is good, even extraordinary, but we can and must do more," Murray said.

Heart disease as the most common cause of death

Worldwide, the most common causes of death in 2013 were heart disease, stroke and chronic obstructive pulmonary disease (COPD). Together, they caused 32 percent of all deaths, almost a third. In the industrialized countries, mortality rates for most cancers fell by 15 percent and those for heart disease by 22 percent. In the developing countries, mortality from diarrhea in particular fell by about five years-. Respiratory diseases and problems around birth. According to the study, mortality from measles and diarrhea fell by 83 and 51 percent, respectively. In many particularly poor countries – including Nepal, Rwanda, Ethiopia and Niger – life expectancy for both sexes increased by more than twelve years. Even in India – of particular importance because of its huge population – life span increased by seven years for men and by about ten years for women.

However, some causes of death increased significantly during the period studied: mortality from liver cancer caused by hepatitis C rose by 125 percent since 1990, and that from cardiac arrhythmias doubled. 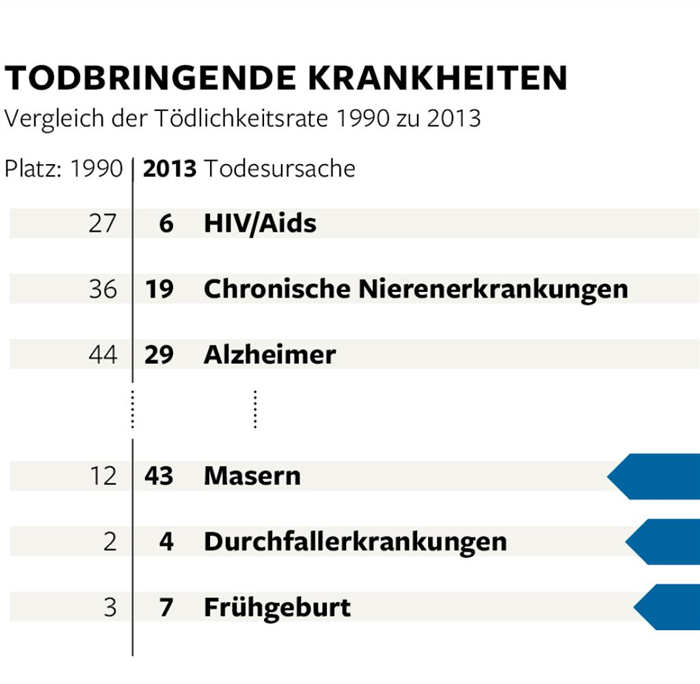 The study also recorded significant increases for drug-related problems (63 percent), kidney disease (37 percent), diabetes (9 percent) and pancreatic cancer (7 percent). As a result of the war in Syria, an estimated 30 people were killed in 2013.000 people killed.

According to the study, most people in Germany died of heart disease, lung cancer and stroke in 2013, followed by Alzheimer's disease, colorectal cancer and COPD. This ranking differs only slightly from the one published by the Federal Statistical Office in November.

If the trend of the past 23 years continues, men and women born in 2030 are expected to have median life expectancies of 78.1 and 85.3 years, respectively, worldwide. "We now need to ensure that we make the right health policy decisions today to prepare for the health challenges and associated costs ahead," Murray was quoted as saying in a news release from his university.