Medical Implications of the Absence ofCombustion in Heated Tobacco ProductsDecades of epidemiological data show that smoking causes a number of serious diseases (including cardiovascular disease, lung cancer, and chronic obstructive pulmonary disease [COPD]) and that, according to the World Health Organization, nearly eight million deaths annually can be attributed to smoking tobacco products. The main cause of smoking-related illnesses is the high number and content of harmful and potentially harmful components (HPHC) produced during the combustion of tobacco products.

The process of combustion requires three elements: a fuel source such as tobacco, oxygen found in the air; and sufficient heat to trigger the self-sustaining and heat-generating reaction. As you pull on a cigarette, the temperature at the tip rises to more than 800 °C, causing the tobacco to burn. This results in the production of smoke (which contains high levels of HPHCs, including, for example, carbon monoxide, formaldehyde, and benzene), heat, and ash. Some of the toxins emitted during combustion form liquid and solid particles that combine with the rest of the emission to create a smoke that is harmful to health when inhaled.

Smoking cessation is clearly the most effective method for current smokers of tobacco products to reduce the risk of harm and disease. Millions of smokers each year decide they are tired of cigarettes and quit smoking completely. However, there are still many men and women who do not quit smoking and continue to use nicotine and tobacco products. We need to offer them alternatives they can switch to. They are looking for a similar taste, ritual, and intake of nicotine as cigarettes, but without the smoke. Thanks to technological advances in smokeless products, this experience can be delivered without the burning of tobacco. Therefore, potentially leading to less toxic emissions compared to combustible cigarettes. Heated tobacco products (HTPs) represent one of these new product categories. Philip Morris International (PMI) introduced the current generation of HTPs called TobaccoHeating System (THS) in 2014; version number, 2.2, for example) was developed and is now commercialized under the trade name IQOS®. British American Tobacco (BAT) introduced "glo" to the market in 2016, and Korean Tobacco and Ginseng (KT&G) entered the HTP market with the introduction of "lil" in 2017. Japan Tobacco (JT) introduced the HTP "ploom" in 2016.

THS 2.2 is based on electronically controlled heating technology that heats a heating blade, which in turn heats the tobacco stick and at the same time measures and controls the temperature of the tobacco. This temperature is kept below 350 °C so that the tobacco does not even come close to burning. It is still necessary to heat the tobacco to deliver nicotine and flavors. The absence of combustion has been scientifically demonstrated in experiments and independently confirmed. These showed that the chemical composition of THS aerosol in an oxygen-containing environment is similar to a nitrogen environment, where combustion is impossible. Scientific studies further support that the aerosol produced by THS does not contain solid particles that are produced when tobacco is burned. Therefore, the THS produces an aerosol of liquid droplets and gas, but not carbon-based solid nanoparticles.

The absence of combustion in the tobacco stick during THS use and the fact that the THS aerosol is not smoke have been confirmed by leading scientific experts in combustion, fire safety, and thermochemistry from numerous countries, including Germany, Italy, the United Kingdom (UK), Japan, Poland, the United States (US), Australia, and Switzerland, as well as an independent research organization in New Zealand. A small clinical study conducted by the Università di Catania in Italy also confirmed the absence of combustion with THS. This study found that unlike cigarettes, carbon monoxide levels on exhalation were not increased in study participants after using either HTP product. The authors concluded that "no combustion occurs with iQOS and GLO". 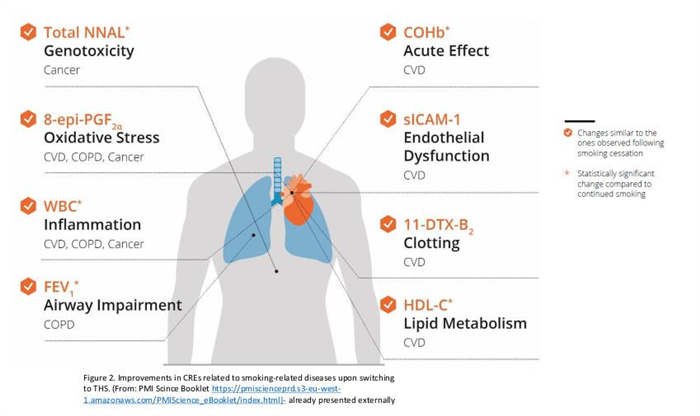 By avoiding combustion, THS produces an aerosol that contains significantly lower levels of harmful chemicals, and the level of harmful chemicals still present is reduced by an average of 95% in THS aerosol compared to that measured in the smoke of a reference cigarette (excluding nicotine, which remains at a comparable level). In addition, relative to cigarette smoke, the content of Group 1 carcinogens (d. h. Agents that are carcinogenic to humans) by the IARC (International Agency for Research on Cancer) reduced by more than 95% on average in THS aerosol. 94% lower free radical content. An 85% lower reactive oxygen species content than cigarettes made from.

The significant reduction of HPHCs in THS aerosol was further confirmed by various public health authorities and independent laboratories worldwide. For example, in April 2019, the U.S. Food and Drug Administration (FDA) Center of Tobacco Products (CTP) granted a marketing authorization for PMI's IQOS Tobacco Heating System to enable its introduction into the U.S. market. In its scientific review, FDA "determined that the aerosol produced by the product under discussion contains fewer toxic chemicals than cigarette smoke and that many of these identified toxicants are present at lower levels than in cigarette smoke. For example, exposure to carbon monoxide [as a result of this product] is comparable to environmental exposures, and levels of acrolein and formaldehyde are 89% to 95% and 66% to 91% lower, respectively, than combustible cigarettes".

The agency ied the marketing authorization along with the Technical Project Lead Review (TPL), which summarized FDA's decision and the scientific basis for the decision. Later in July 2020, FDA approved the marketing of IQOS as a modified risk tobacco product (MRTP) with reduced exposure to harmful chemical information, d. h. a product that is expected or anticipated to benefit the overall public health community. After completing its review of the scientific evidence from PMI – and independent studies, the U.S. FDA has determined that IQOS can be marketed in the U.S. with the following information. 1. The IQOS system heats tobacco but does not burn it; 2. This significantly reduces the generation of harmful or potentially harmful chemicals; and 3. Scientific studies have shown that switching completely from conventional cigarettes to the IQOS system reduces your body's exposure to harmful or potentially harmful chemicals.

The German Federal Institute for Risk Assessment (BfR) also conducted an independent analysis of THS and found that the ". content of major carcinogens in the emissions of the tobacco heating product analyzed is substantially reduced relative to conventional tobacco cigarettes, and that monitoring of these emissions by standardized machine smoke procedures produces reliable and reproducible data that provides a useful basis for assessing exposure and health risks in humans".

In 2018, the Korea Ministry of Food and Drug Safety (MFDS) confirmed that the average reduction in the content of nine HPHCs in aerosols produced by three HTPs (IQOS, glo, and lil) exceeded 90% compared with their content in smoke produced by five of the most common cigarette brands sold in Korea.

Peer-reviewed research on existing HTPs available in various countries confirmed the reduction in the number and content of HPHCs. This is consistent with Public Health England's (PHE) statement that compared to cigarettes, "heated tobacco products are likely to expose users and bystanders to lower levels of particulate matter and harmful and potentially harmful constituents (HPHCs)".

In summary, the totality of available scientific evidence has shown that THS, unlike cigarettes, heats tobacco and does not burn it; this results in a dramatic reduction in the number and content of HPHCs in THS aerosol compared to smoke from a reference cigarette. Therefore, and although THS is not free of risk and delivers nicotine that is addictive, it reduces exposure to toxicants (HPHCs, free radicals, and carbon-based nanoparticles) in smokers who switch from cigarette smoking entirely to THS use.

Several clinical studies have evaluated whether the reduction in HPHC formation in THS aerosol also leads to a reduction in exposure to toxicants when an adult tobacco smoker switches to the product and therefore this also results in a beneficial effect on that person's health profile.

In a five-day clinical exposure study in healthy study participants conducted in Poland, researchers measured blood and urine biomarkers representing exposure to selected HPHCs. These so-called exposure biomarkers, with the exception of those for nicotine, were significantly decreased in the THS group compared with the combustible cigarette group and approached the levels observed in the smoking abstinence group.

Similarly, clinical studies by BAT and JTI demonstrated that healthy Japanese HTP users had reduced levels of exposure biomarkers compared with cigarette smokers. Similar findings were also reported in a recent clinical trial in a controlled outpatient setting in the United Kingdom.

Reduced exposure to HPHCs may have a positive impact on smokers' health, as demonstrated in a six-month clinical trial in a U.S. population. A set of 8 clinical risk endpoints (CREs, d. h. Measures of biological response) were selected because they are known to be negatively affected by smoking and are expected to improve after smoking cessation. These CREs reflect different pathways of action (lipid metabolism, endothelial function, inflammation, oxygenation, oxidative stress, pulmonary function, platelet function, and carcinogenesis) that are associated with smoking-related diseases, such as cardiovascular disease, respiratory disease, and lung cancer. After switching from smoking to THS for 6 months, all biomarkers showed beneficial changes in the same direction as smoking cessation, and smokers who primarily used THS showed beneficial biological effects compared to those who continued to smoke. Nicotine intake was similar in both groups in this study.

The effect of reduced exposure to HPHCs on cardiovascular parameters was analyzed by an Italian research group at Sapienza University. The study reported that THS had a lower effect compared with e-cigarettes and cigarettes on soluble Nox2-derived peptide, 8-iso-prostaglandin F2a-III, and vitamin E levels. In addition, the use of THS and e-cigarettes had a smaller effect on flow-mediated dilation, H2O2 levels, degradation activity of H2O2, soluble CD 40 ligand levels, and soluble P-selectin levels, as well as on blood prere than did cigarette smoking. This study shows that single use of both e-cigarettes and THS (use of one product per session) causes less adverse acute changes than cigarette smoking in clinical markers associated with the development of smoking-related disease (including oxidative stress, platelet activation, flow-mediated dilation, and blood prere).

In addition, a recent three-year follow-up study in a COPD cohort studied the effects of reduced exposure to toxins with THS use. Despite the small number of patients in their study, prof. Polosa and colleagues found that COPD patients using HTPs experienced less frequent exacerbation of COPD and significant improvements in symptoms, ability to exercise, and overall health-related quality of life than compared with patients smoking cigarettes.

Interestingly, recent results of an epidemiological study following a segment of the population of Kazakhstan over time have shown an improvement in health-related parameters after only one year of follow-up. Along with an improvement in respiratory symptoms and pulmonary function, the ability to exercise (assessed with a six-minute walk test) and metabolic syndrome parameters were improved to a greater extent in IQOS users than in cigarette smokers.

According to a recent study by researchers at the National Institute for Public Health and the Environment (RIVM) in the Netherlands, reduced exposure to toxins in THS users may have a beneficial effect on life expectancy. In a case study with THS, the authors examined eight carcinogens found in both cigarette smoke and THS aerosol and reported a 10- to 25-fold reduction in exposure with THS use under study conditions, indicating a smaller reduction in expected lifespan.

In summary, the totality of currently available evidence shows that smokers who switched from cigarette smoking to THS use experienced a substantial reduction in exposure to HPHCs compared with continued smoking because of the lack of combustion in THS. This is further reflected in beneficial changes in clinical risk markers, which moved in the same direction as smoking cessation, and are known to be involved in the development of smoking-related disease. Although we should reiterate that THS is not free of risk and delivers nicotine, which is addictive, it is important to note that the totality of scientific evidence indicates that complete switching to THS poses lower health risks than continued smoking.