The skin of atopic dermatitis patients differs from healthy skin even in periods without symptoms. It is dry, very sensitive and shows an increased tendency to eczema.

Neurodermatitis is a chronic, relapsing disease with changing clinical picture. There are phases in which the skin is almost free of symptoms, and acute phases of the disease with symptoms of varying severity.

Strongly itching, sometimes weeping eczema is the most obvious sign of an acute neurodermatitis flare-up. They persist for several days and weeks and often form incrustations. Persistent and repeated inflammation can lead to extensive thickening of the skin with a coarsening of the surface area (lichenification), especially in the wrist, elbow and popliteal areas.

Depending on the severity and external influences, further symptoms may occur. These include fine, painful tears, z. B. in the corners of the mouth and on the earlobes (rhagades), cracked fingertips and toe tips, the double lower eyelid wrinkle (Dennie-Morgan wrinkle) and conspicuous dark eye shadows. When after a flare-up of excema the inflammation slowly subsides, the skin remains very sensitive. The skin picture is characterized by severe dryness. The lack of oil and moisture is manifested in some areas of the skin by an increased formation of scales.

Even with longer periods without symptoms, the skin's susceptibility to eczema is still high. This means that a new disease flare-up can follow at any time.

Many of those affected find the intense itching of their skin in the corners of the mouth and on the skin particularly distressing. Not only the eczema that flares up during a disease flare-up is associated with excruciating itching, but dry skin can also trigger itching attacks. Sleeplessness, restlessness, but above all violent scratching attacks are the result. But scratching the skin only provides short-term relief. Rather, one inflicts injury to the skin, further damaging the skin barrier and thus increasing eczema and itching.

Some of the symptoms described depend on the age of the patient.

Neurodermatitis in infants and young children

Neurodermatitis often begins in the second to third month of life. In infants, especially the cheeks and the hairy head are affected. After initial reddening of the skin, fine, yellowish-white scales and blisters form, which can burst open. This often develops into a weeping, crusted eczema, colloquially known as cradle cap. 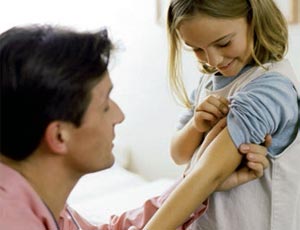 Dry and very itchy eczema in the crooks of the elbows and backs of the knees are typical symptoms of atopic dermatitis in childhood.

With increasing age, the skin symptoms shift. In kindergarten and school age, the eczema occurs mainly on the backs of the knees, elbows and wrists. One therefore speaks of flexural eczema. These areas are particularly prone to lichenification, i.e. a thickening of the skin over a wide area, and are very itchy, so that they are often scratched open and become inflamed. But other areas of the body such as thighs, face, neck and torso can also be affected. Overall, the skin is very dry.

Neurodermatitis in adolescents and adults

In about one third of children, the eczema heals in early childhood. In another third, the disease episodes subside by puberty, but may recur later on. Only about 3 to 5 percent of those affected still suffer from the symptoms of neurodermatitis as adults.

A first occurrence of neurodermatitis is also possible at an advanced age. In adults, eczema appears mainly in the area of the eyelids and on the neck. Sometimes there is also a variant of neurodermatitis with nodules in the crooks of the knees and arms. In addition, neurodermatitis patients often develop skin inflammations on the hands with itchy blisters, dry, scaly skin or painful tears (chronic hand eczema).