The eyes have it in themImagine an orchestra in which the wind players and the strings have not learned to listen to each other. Imagine a basketball team whose players have not learned to pass the ball. In many undertakings, the desired goal requires the cooperation of different partners, and the whole is more than the sum of the parts. Because rheumatologists see patients with a wide variety of comorbidities, they understand the need for multidisciplinary collaboration. Uveitis (inflammation of the interior of the eye) 1 is a typical disease that requires such cooperation. 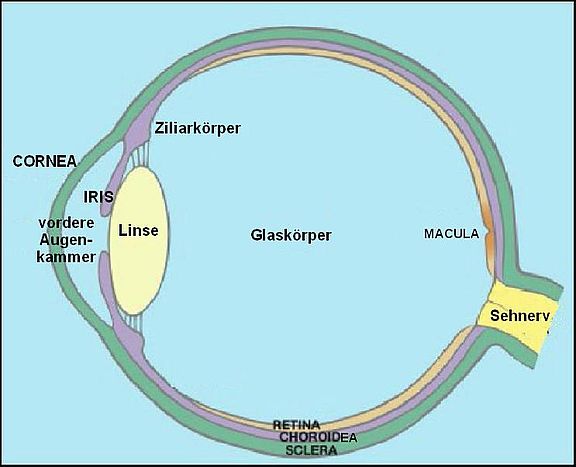 Figure 1:Longitudinal section through the eye. The uvea (purple in the image) includes the iris, ciliary body, and choroidea.

The term Uvea is derived from the Latin word uva = grape. Roman anatomists, when they stripped the outer layers of the eyeball, the transparent cornea and the adjacent white sclera, found a grapevine-like structure composed of the iris, ciliary body and choroid (Figure 1). Any part of the uvea can become inflamed, and often the inflammation spreads to adjacent structures (Figure 2). The types of uveitis mentioned in Figure 2 include iridocyclitis (iritis involving the ciliary body). An indication of uveitis is an increased number of leukocytes (white blood cells) in the anterior chamber of the eye or in the vitreous body, even if these do not belong to the uvea tract. Uveitis has a frequency of 0.1% in the population. Some forms of uveitis occur episodically, and the low frequency means that at the time of a study or interview, 0.1% of participants had active uveitis. Uveitis is behind about the same number of visual impairments as macular degeneration or diabetic retinopathy, although these two diseases are better known to the public as causes of visual impairment. This contradiction may be due to the fact that macular degeneration and diabetic retinal disease occur in old age, while uveitis can occur in childhood or in young adults and persist for decades.

Uveitis in the context of rheumatic disease

Patients with uveitis often need to see a rheumatologist. As can be seen in Table 1, in many rheumatic diseases the eyes can also be involved in addition to the joints. Most forms of uveitis respond to suppression of the immune system, a therapy with which most ophthalmologists have no experience. Just as rheumatic diseases have many causes, different causes have also been identified for uveitis. The main cause is the immune system, as leukocytes (white blood cells) are observed in the eye. Nevertheless, the therapies differ depending on the underlying rheumatic disease. As long as the uveitis is not due to an infection, the therapy is based on the severity and location of the inflammation and not on the cause. In connection with ankylosing spondylitis (ankylosing spondylitis) or Behcet's disease, low back pain and possibly pain in the mouth can be observed. peripheral joint inflammation are indicative of the underlying disease. For reactive arthritis associated with the HLA-B27 hereditary factor. In Behcet's disease, damage to the oral mucosa is frequently observed. In association with ankylosing spondylitis, uveitis affects only one eye at a time, lasts no longer than 3 months, affects only the anterior part of the uvea, may cause hypopyon (pus at the bottom of the anterior chamber of the eye), and tends to recur. In Behcet's disease, uveitis also tends to recur, but rarely is the eye completely free of inflammation between attacks of uveitis. In addition, both eyes are usually affected in the form of anterior uveitis. Intermediate uveitis (with leukocytes in the vitreous) or even as panuveitis (involving the retina). The eye of a patient with ankylosing spondylitis and uveitis appears red, is sensitive to differences in brightness, and fibrin (blood fiber) is often seen in the anterior chamber of the eye. In Behcet's disease, however, uveitis does not necessarily cause pain and redness, and no fibrin is seen. In some cases, the history alone helps to distinguish between the two diseases (one or both eyes affected, duration of inflammation). Other possible findings, such as the presence of retinal vasculitis, require examination by an ophthalmologist. Thus, the ophthalmologist can help the rheumatologist diagnose rheumatic disease, and the rheumatologist can assist the ophthalmologist with immune suppression. There is no good explanation for the fact that eye and joint inflammations occur together. 2 After all, both are favored by the hereditary factor HLA-B27 and other genes (interleukin-23-receptor and endoplasmic reticulum aminopeptidase-1), whereas the genes interleukin-6R and interleukin-18R1 (and probably also interleukin-10) only influence the predisposition to uveitis. Figure 2: A) Anterior uveitis is defined as inflammation of the iris and/or ciliary body. B) Intermediate (middle) uveitis is when mainly cells of the vitreous are inflamed. C) In posterior uveitis, the retina or choroid is inflamed. D) In panuveitis, the anterior part of the uvea as well as cells of the vitreous and the retina or choroid are inflamed. It also happens that only the anterior and middle or only the middle and posterior part of the uvea are inflamed. For common names in Germany, see Fig. 1. 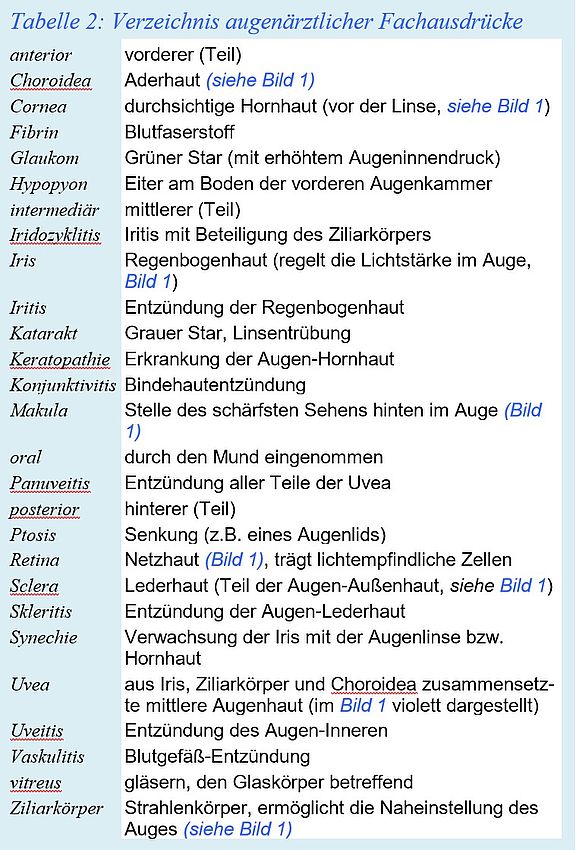 Most ophthalmologists initially treat uveitis – especially acute anterior uveitis (AAU) – with topical corticosteroid drops. Although this treatment has been shown to be effective, it is important to remember that corticosteroid penetration into the space behind the crystalline lens is limited. In addition, topically applied corticosteroids can promote the development of a cataract (cataract, lens clouding) or lead to increased intraocular prere (glaucoma). A special corticosteroid, difluprednate, has the ability to reach inflammation behind the lens of the eye as well. But its tendency to cause cataract or glaucoma is also even greater. When topical corticosteroid drops fail, topical injection of a corticosteroid such as triamcinolone may be helpful. But in addition to the inconvenience of injection, this therapy is associated with the risk of cataract or glaucoma, ptosis (drooping) of the eyelids and, in rare cases, retinal detachment. Triamcinolone can be injected directly into the vitreous, where its effect is particularly high, but there is also a risk of infection of the interior of the eye or hemorrhage (bleeding). Oral (taken by mouth) corticosteroids are another option, but are also associated with side effect risks. Corticosteroid-sparing drugs used in uveitis therapy in addition to rheumatology include antimetabolites (z.B. Mycophenolate mofetil), methotrexate, and azathioprine. Calcineurin inhibitors such as cyclosporine or tacrolimus, alkylants such as cyclophosphamide, and corticosteroid implants that are effective over a longer period of time and are inserted by a surgeon are used less frequently. Evaluation of new drugs for uveitis therapy is hampered by the rarity of some forms of uveitis. In a U.S. study, adalimumab has been shown to be effective in treating noninfectious intermediate or posterior uveitis and panuveitis. Adalimumab is most often used when oral corticosteroids and other immune-suppressing drugs (methotrexate or mycophenolate mofetil) fail. Biologics are generally not needed to treat anterior uveitis, which can be well managed with topically applied medications. An exception is juvenile idiopathic arthritis with disease onset between 2-8 years of age, in which studies have shown adalimumab to be more effective than methotrexate or a topically applied corticosteroid. No corresponding studies have been performed for other biologics. In spondyloarthritis patients, uveitis tends to recur in repeated episodes. Because the episodes usually affect only the anterior part of the uvea (the iris), do not last longer than 3 months, and can be controlled with topical corticosteroids, the question of prevention usually does not arise. Studies have shown that sulfasalazine can prevent uveitis attacks in spondyloarthritis patients. TNF blockers, most notably adalimumab and infliximab, also reduce uveitis attacks but are not prescribed for this purpose alone. After gene therapy has proven successful in treating a hereditary retinal disease, it is conceivable that in the future gene therapy will also be possible against recurrent uveitis.