Inflammatory Bowel DiseaseThe English name "Inflammatory Bowel Disease" IBD stands for a chronic inflammation of the intestines of unknown cause, in which the dog or cat suffers from recurrent diarrhea and vomiting. In contrast to humans who suffer from Crohn's disease, a genetic defect that promotes the onset of the disease has not yet been identified in quadrupeds. However, a possible genetic component is suspected. 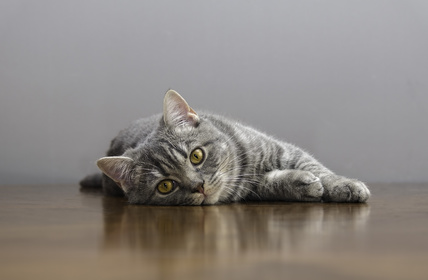 The small and large intestines are usually affected, but rarely only one section of the intestine is inflamed. The constant irritation leads to a high degree of inflammatory cells (so-called lymphocytes and plasma cells) in the intestinal mucosa, it swells permanently and can also scar later on. As a result, the feed is no longer digested properly. Excreted too quickly. If the small intestine is also affected, the animals also lose a massive amount of weight, because it is in this section of the intestine that nutrients and energy are absorbed.

IBD cannot be cured, only controlled. But if doctors and owners have the disease under control, the long-term prognosis for dogs and cats is good to very good, even if relapses are common. However, pet owners have to be patient during the therapy: It takes time for patients to become stable.

The exact causes of IBD in dogs and cats are unclear. Probably an autoimmune reaction of the intestinal mucosa, to which many factors can contribute. 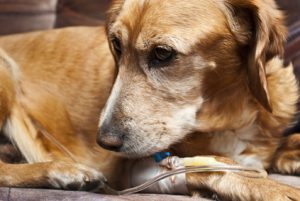 This includes parasite infestation of the intestine (with Giardia, Salomonella, Campylobacter), allergic reactions or intolerances to certain food components (meat proteins, feed additives, preservatives, milk proteins and gluten) or pathological changes in the gastrointestinal flora. But also disturbances in the immune system and a breed-typical disposition can trigger the chronic intestinal inflammations. Predispositions are known for Basenji and Norwegian Lundehund (immunoproliferative enteropathy), French Bulldog and Boxer (histiocytic colitis), Irish Setter (gluten sensitive enteropathy) and German Shepherd (IBD). Siamese cats are also more likely to develop IBD than their conspecifics, as are mixed-breed cats and dogs.

Statistics show: IBD is most common in middle-aged animals, but younger animals can also be affected.

IBD is characterized by chronic recurrent vomiting and diarrhea, often associated with gurgling bowel sounds and severe flatulence. Less common are abdominal cramps and blood and mucus in the feces. The disease develops in relapses, which always alternate with symptom-free periods. The animal can appear healthy as well as sick and lethargic. In many animals the coat becomes thinner. Especially in cats, the bowel disease is often accompanied by loss of appetite and weight.

Depending on the underlying cause, possible complications include malnutrition, dehydration, anemia, hypoproteinemia (low protein levels in the blood), and low vitamin B12 levels. Depending on the severity of the disease, there may also be ascites or endoscopically visible severe changes in the intestinal mucosa.

Diagnosis of the disease is indirect by diagnosis of exclusion. This means that if IBD is suspected, we must first gradually rule out all other causes of diarrhea, such as parasites or feed allergies. Ultimately, then, only a colonoscopy with biopsy provides certainty. The veterinarian may see thickened loops of intestine when examining the abdomen. Enlarged lymph nodes (especially in cats) are noticeable. Fluid effusions indicate abdominal dropsy.

Usually the animals can be treated at home. Unless our patient suffers from severe weight loss with muscle wasting. Then it belongs to the veterinary clinic. Even if the animal is severely dehydrated, has insufficient protein in the blood, and vomits frequently, it should be hospitalized and receive drip infusions.

Animals with IBD must be on a special diet for the rest of their lives, just changing their food is not enough. What diet is appropriate in the long run depends on the underlying disease.

In acute episodes, the first step is to allow the intestinal mucosa to rest and the inflammation to subside. The best way to achieve this is to change the feed to a protein source that the animal has never had before, for example horse. Special diets such as Vet concept SANA or Hills z/d can also relieve the troubled intestines.

In animals with colitis, our nutritionists advise to give raw fiber. In addition, we administer immunosuppressants to our patients (bsp. cortisone, mycophenolate, ciclosporin). Other drug administration depends on the root cause. Until the animal is stable, a check-up should be done every two to four weeks.