So-called childhood diseases are infectious diseases that typically affect children. They are usually very contagious. Often leave behind a lifetime of immunity. But respiratory infections are also common in children.

Article contents at a glance:

Vaccination against many childhood diseases

Many classic childhood diseases such as measles or chickenpox are no longer so widespread in countries with good health care thanks to vaccinations. However, they still occur. One example of this is measles with its dreaded late complications such as encephalitis. Germany also records outbreaks of this highly contagious disease time and again.

Adults can also be affected by infections known as childhood diseases. They are usually more severe in them than in children. 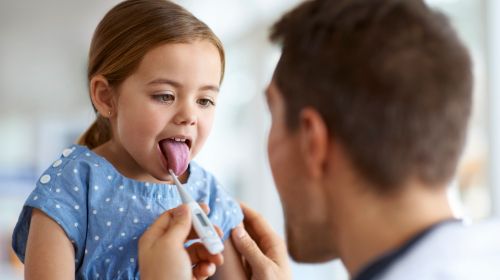 Many childhood diseases that used to be feared for good reason are now extremely rare in Germany or no longer occur at all. An example of the latter is polio, which was last contracted in Germany in 1990. Two more cases occurred in the early 1990s, but these were imported from India and Egypt. A good argument in favor of the polio vaccination, which is administered in Germany as part of the six-part vaccination from the eighth week of life.

Children's diseases in the classical sense have in common that after an infection or the completion of the complete basic immunization, there is usually lifelong immunity, but only against the causative pathogen and only if it is a virus.

Therefore, only the symptoms of the disease can be alleviated. If bacteria are the cause of a childhood illness (such as scarlet fever), antibiotics are usually used. However, no lifelong immunity develops then.

Numerous childhood diseases are accompanied by a rash on the skin. These include scarlet fever, measles, rubella, chicken pox, ringworm and three-day fever. The rash is usually somewhat raised, appears over a large area and is very itchy.

Petechiae are red spots the size of a pin, which usually occur in clusters. They do not itch. Do not cause pain. If you press with a glass on the affected skin area, petechiae do not disappear. Rash, on the other hand, becomes lighter or fades completely.

Above all, infections of the upper respiratory tract are frequent in children. On the one hand, this can have anatomical reasons: Babies between the ages of six and 18 are particularly susceptible to middle ear infections. Affected during the first month of life. Statistically, every young child has experienced at least one middle ear infection by age three.

Inflammation of the middle ear occurs more easily in young children as a result of a cold, because the eustachian tube, which connects the nasopharynx with the ear, is much shorter. Viruses and bacteria enter the ear more quickly. There is no immunity after this typical childhood disease has subsided; otitis media can recur at any time, but is less common in older children.

Although gastroenteritis is not restricted to children, some pathogens affect them particularly frequently or severely. In the first place is the rotavirus, the most common pathogen of gastrointestinal infections worldwide. Babies have a higher risk of a severe course of the disease. The STIKO recommends vaccination for babies from the sixth week of life onward.

The highly contagious norovirus is also not a classic children's disease, but it is the second most common cause of gastrointestinal infections in Germany. Regionally, outbreaks occur again and again. The disease is notifiable. A vaccination does not exist.

The child's immune system is still developing. Parents usually notice this as soon as their child comes into close contact with other children, for example, at the childminder's or kindergarten. While adults have already been through numerous infections, the immune system of a child often encounters pathogens for the first time and is therefore not yet able to fight them so effectively. About eight to ten infections per year are therefore considered normal in children.