Small stature syndromes – potentially life-threatening diseasesThere are many causes of a small stature. Short stature in combination with intrauterine growth retardation (IUGR), developmental delay, and/or unusual stigmata should always suggest a syndromal cause as well.

This work is intended to raise awareness of small stature syndromes, the diagnosis of which should be made as early as possible because of the potentially life-threatening consequences.

This paper was based on internal clinic case reports in light of current literature.

If there are indications of syndromal short stature, molecular genetic diagnostics should be performed quickly in order to initiate appropriate treatment options and screening programs in time.

Short stature in pediatric patients has many different causes. Short stature in relation to intrauterine growth retardation (IUGR), developmental delay and/or specific stigmata should raise the suspicion of a syndromic cause.

This article aims to raise awareness of short stature syndromes, the diagnosis of which should be made as early as possible due to the potentially life-threatening sequelae.

This article is based on in-house clinical case reports in relation to the current literature.

The PTEN hamartoma tumor syndrome (PHTS), Bloom syndrome (BS), microcephalic osteodysplastic primordial dwarfism type II (MOPD-II syndrome) and ligase IV syndrome (Lig4-syndrome) are rare short stature syndromes with potentially fatal outcome. Severe dwarfism is common in all the aforementioned syndromes as well as abnormalities in head circumference and developmental delay. The suspected diagnosis is confirmed by genetic testing. Clinical management is based on frequent screening for comorbidities and their appropriate treatment. Furthermore, causal therapeutic approaches have already been established for PHTS and Lig4-syndrome.

The diagnosis of a short stature syndrome should be quickly confirmed by genetic testing because associated comorbidities may require early monitoring and treatment.

Short stature is a symptom that can have multiple causes. A review on causes of dwarfism, diagnostics as well as therapy indications and side effects was already published in 2015 by Pfaffle et al. in the Monatsschrift Pediatrics published [19]. In addition to common causes, such as familial short stature or constitutional developmental delay, u. a. Malnutrition, malabsorption, growth hormone deficiency – idiopathic, genetic or due to malformation/neoplasia of the central nervous system [11] or iatrogenic – as well as syndromal causes may be possible. The latter should be considered especially in constellations of abnormal findings, for example in combination with developmental delay, intrauterine growth retardation (IUGR), macrocephaly or microcephaly and/or malformations and dysmorphia.

4 different case studies have been collected to raise awareness of rare short stature syndromes that should be diagnosed early due to their potentially life-threatening complications. Early diagnosis can have a significant impact on patients' treatment and prognosis.

After an inconspicuous pregnancy and term birth with a birth weight (GG) of 3900 g and a standard deviation (SDS) of +0.17 for the birth weight as well as a birth length (GL) of 55 cm (1.46 SDS), this patient initially showed a macrocephaly (KU +2.66 SDS) at birth as well as a stagnant length growth and a lack of weight gain during the course of the pregnancy (Fig. 1). 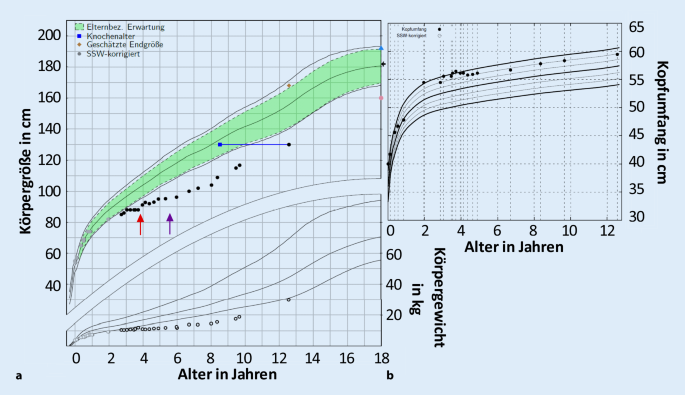 Growth and weight percentiles (a) and percentiles of head circumference (b) of the patient with PHTS. Onset (red arrow) and end (blue arrow) of rapamycin therapy. (percentiles from normative data from CrescNet [15])

At 6 months of age, the patient was noted for upper airway obstruction due to marked thymic hyperplasia. Subsequently, large progressive subcutaneous lipomas developed on the neck and flanks, histologically without suspected malignancy.

Clinically, the child showed severe motor developmental delays: head control was only possible at 6 months, free sitting at 18 months and independent pulling up at 4 years. In addition, a hemangioma of the lower lip was. Alternating erythema on the face conspicuous.

In addition to thymic hyperplasia, there was radiographic evidence of bilateral renal enlargement and fatty degeneration of the retroperitoneal space and caudal back muscles.

At the age of 3 7/12 years showed a height (Kgr) -3.34 SDS and a body weight (KG) of -2.41 SDS. KU was +2.09 SDS. Molecular genetic diagnosis of PHTS was made by detection of a large heterozygous deletion of exons 2-9 of the PTEN gene in a targeted mutation screening.

At the age of 4 years, we saw an impaired, cachectic child (Fig. 2). There was a protruding abdomen with visible lipoma masses in the neck, abdomen and sacral region. Peripheral muscles were massively hypotrophic and hypotonic, and muscle intrinsic reflexes were weakly expressed. The patient with PHTS at the age of 4 years

Therapy with the mTOR inhibitor rapamycin 0.1 mg/kgKG and day was started to inhibit adipose tie growth as well as reduce thymus size [21].

In the first 4 months after initiation of therapy, there was a catch-up growth of 4.8 cm with continued low IGF-1 and IGFBP-3 levels (Fig. 1). After one year of therapy, at the age of 5 years, the child learned to walk. Radiologically, there was an initial decrease in thymus size from 246 to 99 cm 3 , which increased during the course. While the growth of the abdominal lipomas was slowed somewhat, the subcutaneous lipomas remained unchanged [21]. Due to lack of further benefits, therapy was discontinued after 19 months.

At the age of 11 years, papillary renal cell carcinoma was diagnosed and treated surgically and with chemotherapy.

In addition, a Lhermitte-Duclos syndrome (PTEN-associated dysplastic gangliocytoma of the cerebellum) was diagnosed radiologically. It showed a retarded bone age by 3 years.

PHTS is a defect of the PTEN gene on chromosome 10, which causes impairment of lipid phosphatase activity and consequent loss of negative feedback of the phosphatidylinositol-3-kinase/Akt pathway. Consequently, tumor suppressor gene function is absent and uninhibited cell growth occurs [12, 14].

The term PHTS includes Bannayan-Riley-Ruvalcaba syndrome and Cowden syndrome. Proteus syndrome, Proteus-like syndrome, and autism-macrocephaly syndromes and Lhermitte-Duclos syndrome are among the phenotypes associated with a PTEN mutation [3]. The syndromes differ primarily in age of manifestation [14, 16].

The "Cleveland Clinic pediatric clinical criteria for PTEN testing" developed in 2011 shows tab. 1 [22]. Testing for a PTEN mutation is warranted when the main criterion and one additional criterion are met [22].

A possible therapy for PHTS is the administration of rapamycin by inhibiting the PI3/-K/mTor pathway. Case reports already exist in the literature [17]. In vitro, inhibition of adipose tie differentiation was demonstrated [21].

The follow-up diagnosis of diseased children is particularly aimed at the early detection of associated tumor diseases (Tab. 2).

Tab. 2 Diagnosis and management of patients with PHTS in childhood and adolescence. (Modified according to AWMF guideline (2019)[3])

The main criterion of PHTS, besides short stature and tumorigenic tendency, is macrocephaly.

Clinical findings included a doll-like habitus, mild hypotonia and hypotrophy of the muscles, hyperpigmentation of the trunk and legs, pea-sized testes, a developmental delay in speech, and clinodactyly on both sides.

Laboratory findings revealed peripheral hypothyroidism; growth hormone deficiency was not found. A baseline immunological diagnosis did not show any changes. 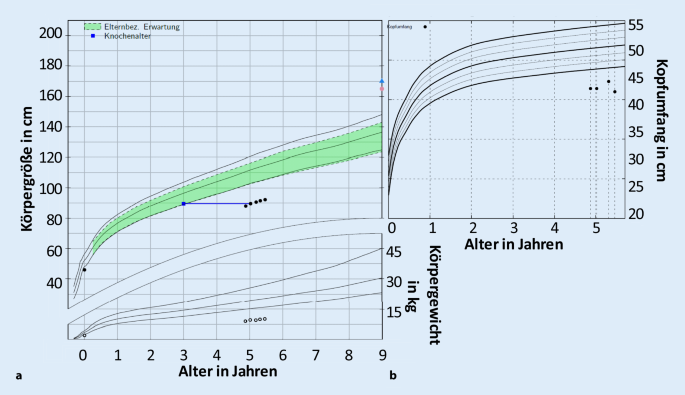 Growth and weight percentiles (a) and percentiles of head circumference (b) of the patient with Bloom syndrome. (Percentiles from normative data from CrescNet [15])

Bloom syndrome is a disease of the group of chromosomal break syndromes. There is a mutation of the BLM gene on chromosome 15, which codes for the DNA repair enzyme RecQL3 helicase [2, 23].

Bloom syndrome is primarily characterized by proportioned short stature with microcephaly as well as IUGR [6].

There is an increased incidence of Wilms tumors and osteosarcomas in the first decade of life, and leukemias and lymphomas in the second and third decades of life [23].

Clinical studies have shown immunodeficiency with low levels of immunoglobulin M and immunoglobulin A. In addition, peripheral insulin resistance and type 2 diabetes mellitus were described [8, 9].

Clinically, erythema on the face may be prominent with sun exposure, as well as hyper- and hypopigmented areas on the skin and telangiectasias [2]. Studies provide evidence that the erythema seen in Bloom's syndrome morphologically and histologically resembles the butterfly erythema of lupus erythematosus [18].

Furthermore, variable syndromic stigmata such as dolichocephaly and hypoplasia of the zygomatic bone as well as a high-pitched voice can be seen [23].

Currently, no curative therapy for Bloom syndrome exists. It seems important to adapt chemotherapy regimens to individual patients and to avoid ionizing radiation [6]. Recommendations for screening and observation of patients with Bloom syndrome can be found in Tab. 3.

In this patient, extreme short stature (KGr -8.79 SDS) as well as microcephaly (KU -7.94 SDS) and dystrophy (BMI -3.61 SDS) were apparent at 14 months of age (Fig. 4). Motor and cognitive development was age-appropriate. In the physical examination, isolated hypo-. Hyperpigmented skin areas on. Growth and weight percentiles (a) and percentiles of head circumference (b) of the patient with MOPD-II syndrome. (Percentiles from normative data from CrescNet [15])

The child developed second degree respiratory distress syndrome postnatally and bronchopulmonary dysplasia during the course of the pregnancy. In the first year of life, the child had to be fed via a gastric tube, but catch-up growth could not be achieved under it. The family history was unremarkable.

The carporadiogram at the age of 14 months corresponded to that of a newborn (Fig. 4).

Moya-Moya syndrome was diagnosed radiologically at the age of 3. Drug therapy was discontinued on acetylsalicylic acid.

MOPD-II syndrome is due to a "loss of function mutation" in the pericenter ring [10]. Pericentrin protein plays a role in the cell cycle [4].

The disease is characterized primarily by IUGR and, in the course, by proportionate short stature with microcephaly ([5, 20]; Fig. 5). Laboratory chemistry may reveal insulin resistance as well as thrombocytosis (87.5%), leukocytosis (75%), or a combination of both (62.5%) [4, 24]. Clinical management is aimed at early detection. Appropriate symptomatic treatment of associated comorbidities from (Tab. 4); curative therapy for the disease does not exist at this time [20].

Small stature and microcephaly associated with thrombocytosis and/or leukocytosis should be considered MOPD-II syndrome.

In this patient, at the age of 2 years, in addition to a marked short stature (KGr -5.63 SDS) and a pronounced microcephaly (KU -13.11 SDS), clinically imprinted (Fig. 6) a pointed foot bilaterally and a combined developmental delay with hyperactive behavioral disorder. 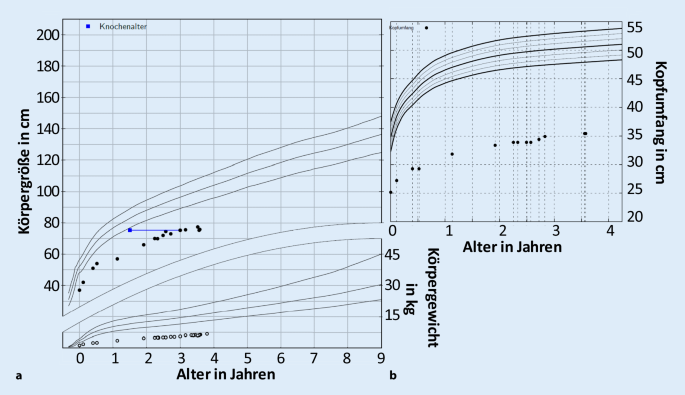 Growth and weight percentiles (a) and percentiles of head circumference (b) of the patient with Lig4 syndrome. (Percentiles from normative data from CrescNet [15])

Due to the corresponding constellation of findings, the suspicion of a ligase IV syndrome had already arisen in advance, which could be confirmed by molecular genetics.

In the course, progressive bone marrow insufficiency developed with trilinear pancytopenia. With increasing transfusion requirements for erythrocytes and platelets as well as recurrent viral gastroenteritis, the indication for allogeneic bone marrow transplantation was made and successfully performed at the age of 3 years.

Ligase IV syndrome is a genetic defect in the LIG4 gene. Thereby a hypomorphic mutation occurs. Thus, to a partial loss of function of DNA ligase IV. This is involved in DNA recombination and repair, as well as an important part in the process of B and T cell activity [7].

The syndrome is characterized primarily by IUGR and postnatal short stature with microcephaly (26 of 28 patients). This is often associated with combined developmental delay [1].

Laboratory chemistry shows pancytopenia and immunodeficiency in patients. Immunodeficiency was seen in studies with B- and T-cell lymphopenia and agammaglobulinemia often in combination with high IgM levels [1].

As a rule, symptomatic supportive therapies are used. In addition, allogeneic stem cell transplantation may be indicated. However, this does not correct the DNA repair defect outside the hematopoietic series.