What is tuberculosis?Tuberculosis (also pulmonary tuberculosis) is a bacterial infectious disease. It counts – together with malaria. HIV – one of the most common infectious diseases worldwide. According to estimates by the World Health Organization (WHO), around two billion people are infected with the pathogen. For immunocompromised and malnourished people, tuberculosis can be fatal. As a result, people in areas with poor nutrition and lack of infrastructure are particularly affected. 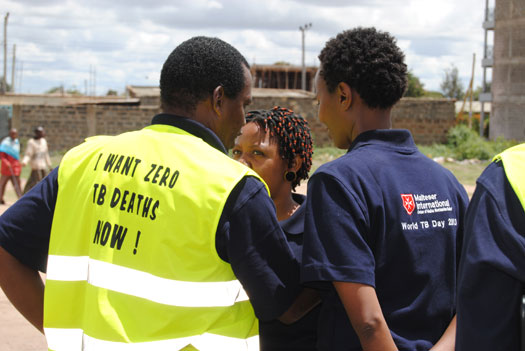 We create awareness of tuberculosis through sensitization measures – as here in Kenya. Photo: Malteser International

Because the pathogens usually affect the lungs, the term "pulmonary tuberculosis" is also used in common parlance. However, the inflammatory foci typical of tuberculosis can also develop in other organs.

The typical symptoms of tuberculosis are unwanted weight loss, coughing and pain when breathing. In a later stage, bloody sputum is produced. The former name of the disease as "consumption" refers to the rapid physical deterioration caused by tuberculosis.

The disease spreads via droplet infection, for example when sneezing. Tuberculosis is not as contagious as other widespread infectious diseases. Only a long and intensive contact with infected persons or a weakened immune system can lead to infection. This is why tuberculosis spreads where there are inadequate hygienic conditions and cramped living conditions.

Transmission is also possible from animal to human via raw milk, which is a particular risk for farmers in economically weak countries.

Who is particularly at risk?

While people with intact immune systems do not experience symptoms that require treatment, people with weak immune systems usually develop pneumonia. So-called "latent tuberculosis" can break out even years after infection. HIV sufferers, malnourished people, senior citizens and children are at risk because their immune system is weakened.

The spread of tuberculosis in history and today

The growing population density during industrialization, inadequate hygienic conditions and a lack of medicines led to the spread of tuberculosis in the 19th century. In the twentieth century, this led to a rapid increase in tuberculosis cases. It has therefore been called the "white plague.

Today, the number of new cases in industrialized countries is in the single-digit percentage range. In economically weak countries in Africa. Southeast Asia, on the other hand, hundreds of thousands of people still contract tuberculosis every year. According to WHO estimates, in 2017, there were more than 10,000 cases of tuberculosis in Kenya ca.